Warsaw Letter: Fryderyk Chopin museum a welcome antidote to bluntness of Polish politics and a reminder of the prized place culture enjoys in this highly cultured nation 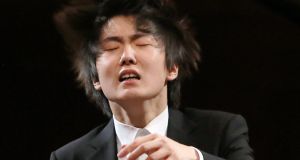 Poland’s general election campaign was a bad-tempered, divisive affair. And so, after days listening to politicians disagree over everything from pensions to refugees, it was a relief to find there is at least one thing Poles can still agree on: their love of Fryderyk Chopin.

Born in 1810 near Warsaw, Chopin is as much national hero as composer in his homeland, celebrated posthumously for keeping Poland alive as a cultural nation even when, carved up by its neighbours, Poland was deprived of statehood. No matter how black your mood, Chopin’s sonatas, concertos and nocturnes have a bewitching, calming effect.

No wonder, then, that thousands of Warsovians sought refuge from the election campaign in the International Fryderyk Chopin Piano Competition.

First held in 1927 and staged every five years since 1955, this year’s 17th edition attracted a record number of applications – almost 500 – of which 78 musicians from 20 countries were invited to take part in the finals.

The finals are no dry music recital, but a mega event located somewhere between the Eurovision Song Contest and the X-Factor. Musicians compete in gruelling knock-out rounds at the Warsaw Philharmonic, with each performance broadcast live on Polish radio, television and online.

I didn’t get to the live performances but, between election interviews in Warsaw, I found myself in a pop-up Chopin cafe, surrounded by high-definition televisions and enjoying coffee and world-class doughnuts.

As the sugar glaze kicked in, I sat back and let the distinctive Chopin sound wash over me like a luxurious musical bubble bath.

The quality of the playing was still remarkable, though, almost as remarkable as how, during breaks, the performances are discussed in minute detail by a studio panel. Après Mazurka, anyone?

Heated debate over the performances continue at dinner tables around Warsaw each evening as people wait to hear who the 17-member jury has progressed to the next round. Not every juror managed to the end: one mysteriously vanished and was next spotted on social media, dancing at a friend’s wedding in Shanghai.

Then there are the reviews, issued each morning in the festival newspaper. “Without demons, this sonata is just not there,” sniffed one critic. Another complained that “Tuesday evening was dominated by noise and strained sound”.

After three gruelling weeks, and a staggering 130 hours of Chopin, this year’s winner was South Korean Seong-Jin Cho. The 21-year-old gets €30,000 prize money, a concert tour and a recording contract with Deutsche Grammophon.

Poland’s National Fryderyk Chopin Institute said this year’s competition attracted a record audience around the world, with half a million daily visitors to its website. There’s also a smartphone app and a dedicated channel on YouTube, where you can listen back to performances.

Over five floors, visitors learn of his early life in Warsaw and his later fame in Paris where, as one friend noted, “he killed all the local pianists dead: the whole of Paris is dumbfounded”.

The French composer Friedrich Kalkbrenner was so astonished by Chopin’s “attack”, the composer wrote to a friend, that “he addressed to me the question of whether I am not a student of [Irishman John] Field”.

He wasn’t, but the compliment tickled Chopin anyway. Although he succumbed to tuberculosis in 1849, aged just 39, the Warsaw museum is alive with his music, particularly the magical cellar where each page turn of sheet music triggers a new audio recording.

Like the piano competition, the Chopin museum is a welcome antidote to the bluntness of Polish politics and a reminder of the prized place that culture enjoys in this highly cultured nation.