Partido X, born out of the ‘indignados’ movement, has just gone public 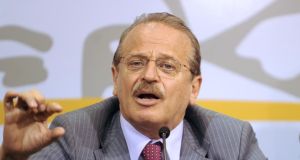 A high-profile ally of Partido X is Tarso Genro, a former minister in the government of Brazilian president Luiz Inácio Lula da Silva and now governor of the state of Rio Grande do Sul. Photograph: Miguel Rojo/AFP/Getty Images)

They accuse the political system of being undemocratic and corrupt. They endorse free public transport and a Nuremburg-style trial for the country’s bankers. And they believe they will take Spanish politics by storm.

They are members of Partido X, a new Spanish political formation that was born last year from the ‘indignados’, a two-year-old protest movement. This week they have stepped away from the shadows of social media anonymity to unveil the identity of their representatives and detail their ambitions, which they say include battling Spain’s many institutional and economic problems.

“We’re in a situation whereby our democracy is full of holes, the system itself has failings,” Joaquín Pagola, a spokesman for the party told The Irish Times.

“Decisions are being taken that go against the wishes of the majority of Spaniards and as far as the economy is concerned, this is an emergency.”

First public appearance
On Tuesday night, Partido X made its first public appearance with a presentation in a cultural centre in Madrid and the event was relayed to other cities around Spain. The party relies heavily on social networks to plan, gather support and even generate financing – it paid for the presentation via crowd-funding, that is, the pooling of small donations from supporters.

Partido X insists it is belongs neither to the left nor right and in a press conference yesterday its representatives would not be drawn on whether the party would field candidates in the 2015 general elections. They did, however, say the party could have the backing of 3.5 million voters by then.

Because of their emphasis on civic participation, their policies are mostly vague, awaiting, they say, the input of members of the public over the coming months. However, keeping a tighter rein on lawmakers is a major theme. “We don’t have any control over our politicians,” Partido X representative Simona Levi said.

“So we have a slogan: ‘Democracy, full stop’ which is a group of rules with which we can really control what a politician does, starting with a transparency law, which we don’t have in Spain, and ending with [regular] referenda, which are almost non-existent in Spain.”

It has already scored a major coup by enlisting the support of Hervé Falciani, the financial whistleblower. Another high-profile ally is Tarso Genro, a former minister in the government of Brazilian president Luiz Inácio Lula da Silva and now governor of the state of Rio Grande do Sul.

But the most obvious reference point for Spain’s new party is the indignados movement, which sprang up in 2011 and was a precursor to the likes of Occupy Wall Street. It was a spontaneous response to the country’s rigid bi-party political system and poor handling of the economic crisis.

“The indignados was a historic moment, something akin to the French Revolution,” Ms Levi told reporters yesterday. “We’re children of the indignados.”

“Up until now no political party had managed to express the anger of the indignados,” said Juan Carlos Monedero, a political scientist at Madrid’s Complutense University.

“[Partido X] is a party made up of young, professional people who are closely involved in social networks and who somehow express this disenchantment – albeit from one particular angle.”

Irish in Peru: ‘There are people still stuck here and they need not to forget about us’ 08:25
Coronavirus: New York appeals for reinforcements as Asia warned to stay alert 08:12
Coronavirus: UK fatalities rise to 1,408 with worst thought yet to come 22:51
Covid-19: Spain now third country with more infections than China 21:43
Coronavirus: New Yorkers cheer arrival of hospital ship as cases soar 21:28