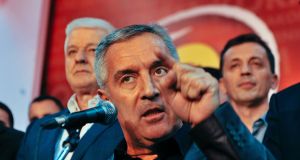 Opposition parties in Montenegro have accused the country’s prime minister, Milo Djukanovic, of using dirty tricks to retain power in Sunday’s election and have poured scorn on claims that Serb gunmen planned to attack state targets and top politicians.

Preliminary results suggest that the Democratic Party of Socialists (DPS) – led by Mr Djukanovic, who has run Montenegro almost constantly for more than 25 years – will be the largest single party in the new parliament with 36 of 81 seats.

The veteran leader said he would seek alliances with small ethnic parties representing Bosniak, Albanian and Croat minorities to secure a slim majority in parliament, and keep the country on the long road to EU and Nato membership.

“Montenegro is continuing towards its European future. We will ratify Nato membership and complete EU accession talks by the end of the [fresh] mandate. We will bring new investments, improve living standards,” Mr Djukanovic told supporters.

Mr Djukanovic (54) accuses the opposition of being funded and directed by Russia, which vehemently opposes Nato membership for the Adriatic state of 620,000 people, and by nationalist forces in neighbouring Serbia, from which Montenegro split in a tight referendum in 2006.

The opposition denies these allegations and insists it has a good chance of forging a parliamentary majority.

During voting on Sunday, Montenegro’s security services – which are run by Mr Djukanovic’s allies – announced that 20 Serbs had been arrested the previous day while trying to enter the country to conduct a politically motivated attack. Among those detained was a former Serbian special forces commander, Bratislav Dikic, who was sacked in 2013 because of alleged criminal activity.

“We suspect that this criminal group was aiming to arrest the prime minister,” the Montenegrin prosecutor’s office said in a statement. “The plan was to attack citizens gathered outside parliament, as well as police, during the announcement of the results, and then take control of parliament and proclaim victory for the opposition.”

“I would like to see and hear serious information that he [Dikic] was planning terrorist acts,” said Mr Vucic, who on Sunday said it was “curious that this is happening today” but deemed it “better for me to bite my tongue” than comment further.

Nebojsa Medojevic, a pro-western opposition leader, said of the alleged plotters: “The oldest one is 73 years old and the youngest is 17, so you see what a farce this arrest is.”

Pro-Moscow opposition chief Andrija Mandic said: “The police junta did everything to keep Djukanovic in power.”

The government also ordered mobile phone operators to halt instant messaging services, such as WhatsApp and Viber, for a few hours on Sunday, in what appeared to be a bid to stop messages urging people to vote for the opposition.

“Blocking such apps is unthinkable in any normal country. I have never heard of that happening anywhere ever in an election,” said another opposition party leader, Ranko Krivokapic.

Non-governmental groups that monitored the elections have filed numerous complaints about alleged irregularities.