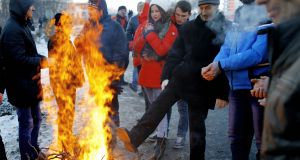 Protesters in the middle of a blocked motorway in Chisinau on Sunday. At least 15,000 people rallied in the capital in the latest demonstration against a government that was hastily approved by parliament and secretly sworn in late last Wednesday. Photograph: Robert Ghement/EPA

Moldova’s ruling coalition has rejected calls for the controversial government to quit and call snap elections, setting the stage for more street protests in a corruption-riddled country that is being pulled between Russia and the West.

At least 15,000 people rallied in the capital Chisinau on Sunday, in the latest demonstration against a government that was hastily approved by parliament and secretly sworn-in late last Wednesday night by Moldovan president Nicolae Timofti.

Critics claim the covert nature of the cabinet’s appointment – and the key role played in its creation by shadowy oligarch Vladimir Plahotniuc – make a mockery of its claims to support democratic reforms, EU integration and the fight against graft.

The rallies have brought together pro-EU and pro-Russian Moldovans, and protest leaders have vowed to block major roads and possibly rail lines and Chisinau’s airport unless the government meets their demands by Thursday.

Andrian Candu, speaker of parliament and a leading member of the ruling coalition, insisted on Monday there was no legal way to call snap elections and said that the new government must be given time to end Moldova’s crisis.

“There are only two legal ways now to dissolve parliament and have elections – if we fail to elect a new president after his mandate expires in March, or parliament’s work is blocked for three months – parliament cannot just dissolve itself,” Mr Candu said.

“The current government and parliamentary majority really has to show results in days and weeks. We are counting on the first 100 days of the government to show actions and results. The time for nice messages is over,” he said.

If the government failed to show swift progress it would probably be unable to muster support for its presidential candidate, and parliamentary elections would subsequently be triggered for the summer, Mr Candu said.

Critics say this is just the latest Moldovan government whose unscrupulous behaviour poisons people’s faith in the European Union and the country’s faltering push to join it.

“The EU is watching what will happen in the next month or two… Everyone has question marks over the government, and whether it is pro-EU and how it will act,” Mr Candu said.

He added that neighbouring Romania was perhaps the cabinet’s strongest supporter – prime minister Pavel Filip is due to visit Bucharest on Tuesday.

“I believe the United States will take a position based on results and actions. If the government can be professional and efficient, the US will applaud.”