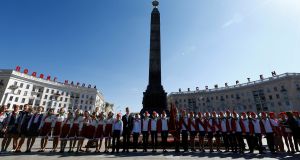 Thirty years ago last month, an explosion at the Chernobyl nuclear plant in what was then the Soviet Union sent vast amounts of radioactive dust into the atmosphere, falling on countries as far away as Ireland.

Though Chernobyl is in Ukraine, it’s estimated that the prevailing winds resulted in up to 70 per cent of the radioactivity being deposited on Belarus, much of it in the southern region of the country, close to the Ukrainian border.

Undeterred by the legacy of Chernobyl – many here still suffer from cancers and other diseases as a result of what ranks as the world’s worst nuclear accident – Belarus is now building its own nuclear power plant.

Vladimir Gorin, deputy chief engineer at the plant under construction at Ostrovets, near the Belarus border with EU member Lithuania, proudly shows a group of mainly Belarusian journalists round the giant site.

“Our design and construction methods are among the safest in the world,” he says. “We are proud to have such a plant in our country.”

Gorin, a squat, affable man built like a wrestler and with a handshake to match, says that Chernobyl had no protective shield in case of an explosion. In contrast, this plant will have two steel containment shells to ensure that, in the event of an accident, no radioactivity will leak into the atmosphere.

Government critics say no proper public hearings have been held about the plant, and that those who dare to raise objections have been harassed or arrested.

We are shown into the nuclear plant’s control room, which is like the flight deck of the Starship Enterprise, with its panels of giant computer screens and blinking lights.

A klaxon-type alarm goes off. Operatives leap to telephones and press switches.

The panic quickly passes. The plant is only half built. and it is just an emergency demonstration for our benefit.

Belarus is both serious and surreal, a halfway house between an expanded Europe to the west and the vastness of Ukraine and Russia to the east.

The capital, Minsk, which rises out of the flatness of the steppe like the backdrop of a stage set, is all wide, straight boulevards lined by uniformly designed tower blocks. There are statues of Lenin and large squares for military parades.

Yet there are also ornate churches of various denominations, trendy cafes and fashionable shops. The city is spotlessly clean and well ordered.

People can appear gruff, especially those in authority, but there is also humour and kindness.

When I went to the opera (€10 for one of the best seats in the house), I lost the cloakroom tag for my coat. The woman in charge at first loudly berated me for my carelessness, then relented and insisted on searching through the racks. Meanwhile, a local woman offered to lend me her husband’s jacket.

Belarus imports more than 80 per cent of its energy, almost all of it from Russia. The rationale for building the 2,400 megawatt power plant at Ostrovets is to give the country more energy independence.

Neighbouring Lithuania, always suspicious of a government in Minsk it sees as a remnant of the old Soviet order, is deeply concerned about what’s going on. It points out that the plant at Ostrovets is only 20km from the Lithuanian border and only 50km from Vilnius, the capital.

Officials in Vilnius say Belarus has not answered questions about the safety of Ostrovets and is in contravention of international agreements on nuclear facilities. The government in Minsk firmly denies the accusations.

Svetlana Alexievich, the Belarus author and winner of the 2015 Nobel prize for literature for her work on interviewing Chernobyl victims and other writings, has described the nuclear fallout from Chernobyl as an unimaginable disaster for her country.

Back at the new nuclear plant, due to become operational in two years, we are being bombarded with data. So many thousands of tons of concrete, so many tons of steel are being used in its construction.

“What happens if a missile is fired at the plant?” asks one journalist.

“Then we are all in trouble,” comes the reply.