Migrants and police clash as Macedonia builds fence at border 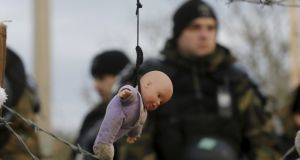 Migrants and police have clashed and Macedonia has started building a fence on its border with Greece, as Balkan states continued to allow only asylum seekers from Syria, Iraq and Afghanistan to continue towards western Europe.

At least 18 Macedonian police officers were injured as migrants hurled rocks at them outside the border village of Idomeni, in apparent reaction to the sight of fence posts and razor wire being prepared to seal stretches of the frontier.

They were also angered by the accidental electrocution of a Moroccan man, who suffered severe burns when he climbed on to a stationary railway wagon near the border and touched overhead power lines.

Aid agencies said they treated about 20 migrants for minor injuries after police responded to the stone throwing by firing tear gas and stun grenades at the angry crowd, which comprised about 200 of the more than 1,000 people stuck at Idomeni.

With winter weather closing in on the “Balkan route” used by most of the more than 850,000 asylum seekers who have arrived in Europe this year, aid groups warn of a potential humanitarian crisis in some of the continent’s poorest states.

Macedonia, Serbia, Croatia and Slovenia are allowing only people fleeing conflict in Syria, Afghanistan and Iraq to cross their territory, blocking thousands from other states who are deemed to be “economic migrants”.

Slovenia and Austria have also erected fences along stretches of their borders to “direct” migrants to legal crossing points, and Hungary effectively blocked asylum seekers from its territory by building barriers along its frontiers with Serbia and Croatia.

Aleksandar Gjorgjiev, a spokesman for Macedonia’s government, described the border work as “technical operations for channelling the migrant flow to official checkpoints, in order to ensure humane treatment and to register the migrants”.

The new rules were implemented two weeks ago without warning or adequate preparation to provide for people stranded on Balkan borders thousands of kilometres from home, with no way forward and no desire to go back.

Most of those now in limbo are from countries such as Iran, Morocco, Pakistan and Somalia, who appeal to the EU to help them in their bid to escape a range of ills, including crushing poverty, political repression and rampant corruption.

Medecins Sans Frontieres expressed concern over “the medical and humanitarian consequences of these new border policies” and warned that they were “likely to force people into taking more dangerous routes and into the hands of people smugglers”.

“MSF calls on governments in Europe and the western Balkans to comply with their protection obligations,” the group said.