‘We need to address the roots of the problem,’ says UN secretary general at Vatican 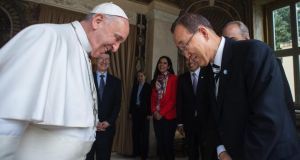 Pope Francis and UN secretary general Ban Ki-moon shared their concerns about both migration and climate change during an informal, half-hour meeting in the Vatican today. The two men met at the Pontifical Academy of Sciences in the Vatican gardens, where the secretary general was attending a Vatican seminar on climate change and environmental issues.

Given that last week witnessed a boat people tragedy in the Mediterranean in which at least 750 people drowned, it was inevitable that the migration issue featured large in the talks.

“We shared our shock at the recent grievous loss of life in the Mediterranean,” said Mr Ban, adding: “These migrants, many of whom are refugees, are desperate for a better future . . . We need to strengthen search and rescue operations, and stop the criminals who exploit the most vulnerable people . . . We need to address the roots of the problem.”

The secretary general argued that the measures agreed by EU leaders at an emergency summit last Thursday are “an important first step” but he said that “more needs to be done”, adding:

“Thousands of people are drowning. These are the poorest and most vulnerable people, who are risking their life . . . for the slimmest possibility of an opportunity. That really humbles and saddens us.”

The UN leader was dismissive of the usefulness of the proposal, initially supported by the Italian government, to destroy the vessels used by traffickers operating out of Libya. He said that such a measure could prove disastrous for local fishing-based economies.

Today’s seminar, to a certain extent, was intended to complement Pope Francis’s forthcoming encyclical on environmental issues, due for release in June. Saying that he looked forward both to that encyclical and to the pope’s visit to the UN in New York in September, Mr Ban Ki-moon added: “Science and religion are not at odds on climate change . . . Indeed they are fully aligned.”

During that visit to the United States in September, the pope will also meet President Barack Obama. In an interview in Monday’s Wall Street Journal, the US president was asked what issues he expected to discuss with Pope Francis:

“You know, in our last conversation, we spent a lot of time talking about issues of poverty . . . and I suspect that that’s a theme that he’s going to continue to be interested in,” said the president, adding:

“We’re going to talk about climate change, I’m sure, because he is very clear that part of the church’s teachings and part of my faith is we have to be good stewards of this incredible planet that we have been given . . .

“And I think issues of war and peace. You know, he is somebody who rightly, I think, expresses concerns about reducing conflict and reducing war, including in the Middle East, where Christians have been viciously attacked. And we consult with the church very closely about how we can protect religious minorities in some of these war zones.”