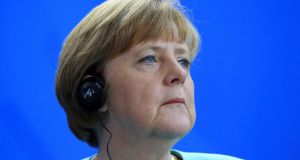 Chancellor Angela Merkel has poured cold water on the prospect of a last-minute, third bailout for Greece from its EU-IMF creditors as the clock ran down last night on the second.

As Alexis Tsipras contacted Brussels with his latest proposal on Tuesday afternoon, the German leader said there would be no new negotiations until after the July 5th referendum on the existing programme.

With that, Greece’s largest single creditor country appeared determined to maintain a tough-line – and pressure on the Greek leader – until the result of his snap referendum is known. “This evening at exactly midnight Central European Time the [Greek] programme expires,” said Dr Merkel at a press conference, before the Tsipras proposal was filed.

She said later in the evening that Athens was to blame for allowing the bailout program to expire. German law, underpinned by a constitutional court ruling, obliges the federal government to seek a mandate for all ESM bailout fund payments from the Bundestag, the lower house of parliament.

Senior officials in Dr Merkel’s Christian Democratic Union, fearing a voter backlash for backing further aid for Athens, said Mr Tsipras had left it “too late” by calling his referendum at the weekend.

While Dr Merkel’s Social Democrat (SPD) coalition partners said Sunday’s vote was effectively a vote on Greek euro membership, German finance minister Wolfgang Schäuble took a more conciliatory tone, telling his party’s backbenchers ahead of a eurogroup conference call that Greece will stay in the euro zone regardless of how voters decide on July 5th.

The future of EU-Greek relations is likely to dominate a two-day visit to Berlin on Wednesday by the Oireachtas Joint Committee on European Affairs.