Lorca’s grave may be uncovered 78 years after execution 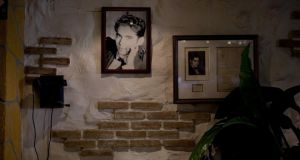 A portrait of Federico García Lorca hangs from a wall in a restaurant near the site where archeologists are searching for a mass grave of victims of the Spanish Civil War in Alfacar, near Granada. Photograph: Pablo Blazquez Dominguez/Getty Images

A group of researchers believe they are on the verge of finding the resting place of Spain’s most celebrated modern poet, Federico García Lorca, nearly eight decades after his execution at the start of the country’s civil war.

In August 1936, the left-leaning Lorca was arrested by soldiers loyal to Gen Francisco Franco and shot dead near Granada. It is widely believed that three other men were killed with him. But in the 78 years since, there has been disagreement over the location of the unmarked grave where the four were buried. Now a group of historians and archaeologists believe they have solved the mystery and will soon uncover the remains of the author of Poet in New York and the play Blood Wedding.

The Socialist-led Andalusian regional government has provided €15,000 for the search, which began in mid-November in Alfacar, eight kilometres from Granada. Historian Miguel Caballero believes he has identified the correct site after combing the testimonies of 48 supporters of Franco who were involved in Lorca’s arrest and execution.

“Everything is falling into place,” Caballero told El País in November. “Of those 48 [testimonies] there are 10 which are valuable and which coincide.”

The Andalusian government has insisted its priority is to find the remains of all those killed in the southern region during the 1936-39 civil war, which pitted Franco’s forces against leftist republicans, rather than just locating Lorca. However, the poet’s death has come to represent the brutality of Franco, who was dictator of Spain from 1939 until his death in 1975.

In 2009, the Andalusia authorities spent €70,000 on a search for Lorca based on the research of Irish Hispanist Ian Gibson, the leading authority on the writer. However, after excavating an area just a few hundred yards from where the current search is taking place, no remains were found. Gibson, who lives in Madrid and has studied Lorca for over 40 years, is not convinced the new efforts to find the writer will be successful, but says he would be delighted if he is proved wrong.

“Lorca is the number one symbol of what happened to the Spanish people as a result of Franco’s repression,” he told The Irish Times. “He is the most famous ‘desaparecido’ worldwide of the Spanish Civil War and naturally, people feel very strongly about this, because he does symbolise what happened.”

Now, any efforts to locate and exhume mass graves are driven by volunteers or local authorities.

“It’s an absolute outrage what is happening in this country, that these [victims] are out there as a result of the Franco repression and the state is not looking for them,” said Gibson.

Another obstacle has been the poet’s family, which has spoken out against the search for his remains.

Meanwhile, Gibson is not the only person who is doubtful about the prospects for the current search. Francisco Galadí’s grandfather was one of the men who was reputedly killed and buried alongside the poet.

“It’s good that they’re doing this, but I always say that they shouldn’t focus purely on the figure of García Lorca – there are many, many more dead,” Galadí said.

“They have to look for all the dead – not just García Lorca and my grandfather. Spain needs to do something about this situation. It’s an embarrassment on an international scale.”