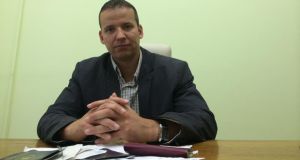 The mayor of the Hungarian village of Asotthalom, Laszlo Toroczkai, in his office. On his desk are passports and other documents thrown away by illegal migrants crossing from nearby Serbia. Photograph: Daniel McLaughlin 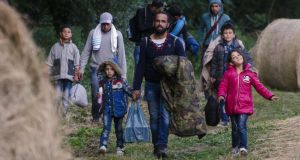 Migrants at the border between Hungary and Serbia. Hungary says it is building a four-metre high fence to keep out migrants. Photograph: Csaba Segesvari/AFP/Getty Images

Beside a quiet country road that sidles into Hungary from the Serbian border, weary people push through a last barrier of rain-glossy trees and stand, stock still under soft drizzle, as if wondering what life in the European Union will bring.

For many, the first thing is a police van drawing to a halt to transport them to a holding centre where they will start their application for asylum.

Migrants who make it unmolested through this dense border forest, which they call the “jungle”, continue along the road or head through verdant fields until they reach the nearest village.

Asotthalom lies about 8km from the Serbian frontier and, on one 12-minute journey along that route yesterday morning, four groups of illegal migrants, each numbering about 10 people, emerged from the trees to take a hard-earned look at the EU; locals officials say hundreds are on the move through this area each day.

Most migrants come from Syria, Afghanistan and Iraq, but a clandestine route through Turkey, Greece, Macedonia and Serbia also delivers people from as far apart as Kosovo and Burkina Faso to a village that doesn’t know what to do with them.

“We feel sorry for them, of course. They’re tired and hungry and ask for food and water,” said local woman Monika Cseszarne. “But more and more are coming. Now the numbers are just brutal.”

The 4,000 residents of Asotthalom and surrounding farms find themselves on a frontline of the EU’s growing migration crisis, living beside a border that more than 50,000 asylum seekers have crossed so far this year.

However, Hungary’s government says it has had enough, and today officials are due to unveil plans on how to close the border with Serbia to illegal migrants. Last night, the EU was seeking “immediate clarification” of Budapest’s announcement that it would no longer adhere to the bloc’s so-called Dublin regulation; this allows EU states to send migrants back to the first member country that they entered.

The main element of the plan is the construction of a four-metre-high fence, along the full 175km length of the frontier.

Rights groups are in uproar, but Budapest insists it is only mimicking measures that EU member states Greece and Bulgaria have taken to stop illegal migrants arriving from Turkey.

The idea is widely credited to the mayor of Asotthalom, Laszlo Toroczkai, who first publicly called for a fence to be built last autumn.

“Some days thousands come across, and only about half are caught and registered,” Toroczkai told The Irish Times yesterday.

“We want the fence to go up as soon as possible, because the number of migrants has increased dramatically since the announcement last week that it would be built.

“But something that big can’t be constructed in a few days, and I don’t see any other changes on the border yet, like more police patrols.”

Asotthalom has created a “civil guard” of about 15 volunteers who patrol and alert local police to illegal migrants.

“No migrants have been involved in violent crime here, but they’ve stolen bikes and cars and damaged property,” said Toroczkai, who has close ties to Hungary’s ultra-nationalist Jobbik party.

“Sometimes they break into an empty farmhouse to sleep or change clothes. But occasionally the owner comes back when they’re inside – and who would be pleased to find an Afghan or African family in their home like that?”

“For Syrians, for example, the EU and US should fund camps in Turkey ... It’s just impossible for Europe to take in billions from Africa and Asia, ” he said.

“Most of those who come here have destroyed their documents, so we’ve no idea who they are or where they’re really from.

“And even if they come from a war zone, what did they do there? Is this person a real refugee or a jihadi?”