Magazine back on sale one week after the terrorist attack

Three million copies of Charlie Hebdo go on sale across France, a week after 12 people were killed in a massacre at the magazine’s offices. Video: Reuters 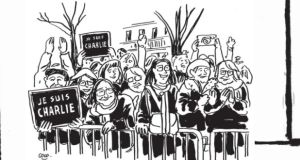 Click here to download the centrespread of today’s Charlie Hebdo, published one week after the terrorist attack on the the magazine and its staff.

When the surviving staff of Charlie Hebdo sat down to plan their first issue after the killing of their friends and colleagues, they wondered how the magazine could negotiate being adopted as a cause célèbre by the very establishment it holds up to ridicule. How could its voice retain its subversive edge? And how could they do it without some of their most celebrated cartoonists? Above all, how could they be funny at a time like this?

The tone of the issue is defiant, poignant without being mawkish, occasionally crude and often sharp.

The two pages reproduced here (above) focus on the aftermath of the atrocity, particularly on last Sunday’s rallies for national unity. A series of cartoons, signed by Renald “Luz” Luzier, lists the “pluses and minuses” of the past week. Among the pluses: the outpouring of public support (accompanied by a minus: the orgy of flag-waving) and the atmosphere of love in the air (minus: “Flags at half-mast, libido at half-mast”). A political target is prime minister Manuel Valls, who, occupying a position on the right of the Socialist Party, has been a longtime target of Charlie’s pencil. A minus: shaking hands with Valls.

Another plus is being able to smoke at their new home at Libération’s offices. Directly opposite the image of a cartoonist lost in smoke is the face of Stéphane “Charb” Charbonnier, the paper’s murdered editor, with the reminder: “Lung cancer, you f***ers.”

The pages contain other tributes to slain friends. There’s a hug for “Franky” (Franck Brinsolaro, the policeman who was killed while protecting Charb, and a wish that “Mustapha” (Mustapha Ourrad, the magazine’s copy-editor) and “Elsa” (Elsa Cayat, a psychoanalyst and columnist) could have been around, the former to correct this “absurdity”, the latter to tell them it was all just a bad Lacanian dream.

Cartoonists Luz and Coco single out Binyamin Netanyahu and Angela Merkel. They recall how Charb loved to draw the “psychorigide” (hopelessly rigid) mouth of the Israeli prime minister, and how “Oncle”, Bernard Maris, would dismantle the German chancellor’s liberal policies. Elsewhere, there’s a nod to Jean “Cabu” Cabut, a 76-year-old cartoonist who was also among the dead.

The National Front, one of Charlie’s favourite targets, makes an appearance. Four figures, including Marine Le Pen, hold placards that read: ‘This is our country’, ‘I am delighted’, ‘I am racist’ and ‘I am Charlie Martel’. The latter sign, held aloft by party patriarch Jean-Marie Le Pen, is a reference to Charles Martel, the Frankish leader who is credited with halting the Islamic advance into Christian western Europe at the Battle of Tours in 732. A swarm of flies hovers above their heads.

The pages are filled with gentle self-mockery. In a drawing of the majestic Arc de Triomphe, “Je Suis Charlie” projected in capital letters on its facade, the eternal flame confides: “I have an erection.”

Yet, amid the jokes, the tone is sincere. “We walked, walked, walked as much as we could,” the reader is told of Sunday’s march. “And then we saw you - the anonymous, the readers, the fidèles [faithful], the Infidèles, those who buy one day and those who buy every day, the subscribers, the newspaper sellers, the disappointed, the annoyed. We saw you in the tens, then hundreds, thousands and millions, and at once we found ourselves humming in our heads a Trenet drawn by Cabu.”