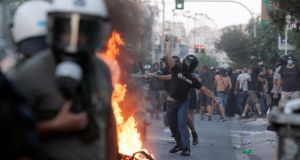 Protesters clash with riot police in the suburb of Keratsini, Athens following the killing of an anti-racism rapper. Photograph: Getty

Thousands of people took to the streets in dozens of cities across Greece yesterday evening, in protest at the fatal stabbing the previous night of a well-known anti-fascist hip-hop artist by a member of a neo-Nazi party. The incident sparked condemnation across the country’s fractured political spectrum.

Police fired tear gas and deployed water canon after some protesters set dumpsters on fire and started hurling things at police lines, in angry scenes reminiscent of the rioting after the police shooting of a teenager in 2008. Police said they made 23 arrests and detained 42.

Pavlos Fyssas (34) suffered two fatal knife wounds to the chest as he was being chased, around midnight, by a large group of men, many wearing black sweatshirts and camouflage combats, in a working-class district of Piraeus.

Police said Fyssas managed to identify his attacker as he was being taken to hospital, where he was later pronounced dead.

Fyssas’s alleged assailant (45) was arrested by police, who said that during questioning he confessed to the stabbing and confirmed he was a member of Golden Dawn, a fascist party that last year won 18 seats in the 300-member parliament.

Blaming the death on “fascists”, Panagiotis Papanikolaou, the head of neurosurgery at the hospital, said that “for three years, they have trained on the bodies of migrants, who were bought here wounded and blaming the attacks on that group”.

Escalation of attacks
However, recently Golden Dawn stepped up its rhetorical and physical attacks. Last week, a large group of Golden Dawn members attacked and hospitalised nine members of the Communist Party in another Athens working-class district as they erected posters for a youth festival.

Over the weekend, Golden Dawn MPs led a large party contingent that noisily hijacked – from conservative and nationalist groups – a commemoration for members of a Greek wartime collaborationist unit executed during the second World War at Meligalas, in the southern Peloponnese, by the left-led resistance.

As the suspect was led before a prosecutor yesterday evening, police said they had also detained his wife and another woman for misleading their investigation, and the head of the local Golden Dawn branch on firearms offences.

A prominent member of the vibrant Greek hip-hop scene since 1997, Fyssas performed under the stage name of Killah P and was known for his activism against the extreme right.

As news spread of his killing, fans and friends make tributes on the dead singer via his Facebook page. “Safe journey. Greeks, don’t fall into the trap of a new civil war in which the country is heading,” read one. “Shame on those who are anathema to our society, shame on neo-Nazis,” said another.

His killing generated political condemnation across the ideological spectrum. Greece’s president stressed the need for institutional, social and political decisiveness in the battle against what he said was a “repulsive phenomenon”.

“It is our duty not to allow any space whatsoever to fascism – not even an inch,” Karolos Papoulias said.

Main opposition Syriza called for exemplary punishment, saying the stabbing represented “the apex of the criminal actions of the neo-Nazis of Golden Dawn”.

‘Hate crimes’
Reaction also came from abroad. Nils Muižnieks, the Council of Europe’s commissioner for human rights who last April said the government should consider banning Golden Dawn, tweeted that the “political and police reaction to the heinous murder of Pavlos Fyssas is a positive step to curb hate crimes in Greece”.

The victim’s family said Fyssas will be buried this morning.

1 International Space Station visible again in Irish skies tonight
2 Coronavirus: Republic reports 14 further deaths and 212 new cases
3 ‘Everyone still thinks it’s a joke’ - parents of toddler with coronavirus speak out
4 Coronavirus in Ireland: New powers of arrest for gardaí expected to come into force
5 ‘On the bike I meet no one’: 78-year-old cyclist refuses to cocoon
Real news has value SUBSCRIBE