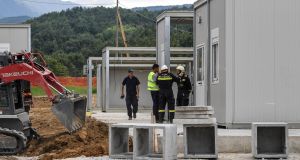 Even as Italian prime minister Matteo Renzi was holding a meeting on Wednesday intended to promote a 10-year reconstruction project in the aftermath of Italy’s latest devastating earthquake, schools in different parts of Italy were being judged to be unsafe by both parents and local authorities.

“We’ve got to imagine a project, not for the next few months but for the years ahead,” said Mr Renzi at the meeting with local councils, promoting his “Casa Italia” (meaning “The House Of Italy”) initiative.

Mr Renzi said: “This is a project that will not yield results tomorrow but which has a serious preventative purpose.

“We are here today to ask you [local authorities] to contribute with your evaluations, your technical know-how and experience to a project that will last for at least a decade . . . ”

The huge problems facing “Casa Italia” were immediately highlighted when local authorities in the Sicilian port town of Messina, site of a devastating earthquake in 1908, ordered the total closure of the Ettore Castronovo school, right on the eve of the new school year.

Messina public works engineer Dr Gaetano Sciacca declared that the 1970s-built school “represents a huge risk for everybody, even without an earthquake”.

That decision came the day after more than 400 families in Sulmona, near L’Aquila, held an animated meeting with town mayor Annamaria Casini, telling her that they would not be sending their children to school next week because of fears about the buildings’ safety.

In response, the mayor has delayed the start of the academic year by a week.

In the meantime, the newly-formed parents’ committee, Safe Schools, hopes that the Sulmona authorities can find alternative temporary structures, such as portakabin prefabs.

Sulmona, just 150km south of Amatrice, the worst hit town in the most recent quake, is just one of many towns now seriously questioning the structural solidity of public buildings, especially schools.

This comes in the wake of the partial collapse of the Romolo Capranica school in Amatrice, even though this recently-restructured building had been considered seismic-proof.

Given not only last week’s disaster but also the trauma of a 2002 earthquake in San Giuliana di Puglia, southern Italy, where 27 children and a teacher died after their nursery school roof collapsed, the question of school buildings’ safety has led to concerns.

In Amatrice itself, it is still not clear just how and when the school year will begin, given that there are no suitable and safe buildings still standing.

The president of the region of Lombardy, Roberto Maroni, has visited Amatrice to meet with the head of the civil protection, Fabrizio Curcio, with a view to making available wooden cabins which could become temporary classrooms.

Meanwhile, Rieti public prosecutor Giuseppe Saieva confirmed this week that his office will be investigating 15 sites in relation to illegal construction or reconstruction in the earthquake zone.

As for the zone itself, it continues to be shaken by twice daily tremors, with one of those causing a landslide on the Via Salaria beside Amatrice, prompting the closure of the road.