In the town of Ascoli Piceno, a state funeral was held in a sports hall for 35 of the Italian earthquake victims. Video: Reuters 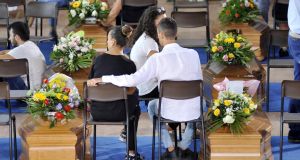 People sit beside coffins holding remains of their relatives before a mass funeral for some of the victims of the earthquake that devastated central Italy, in Ascoli Piceno, Italy. Photograph: Cristiano Chodi 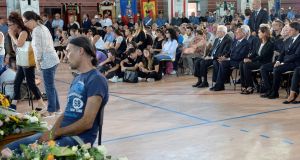 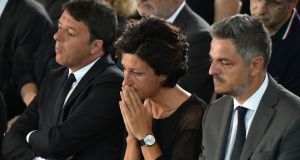 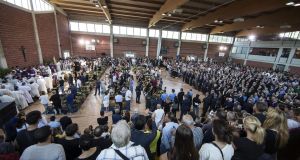 The mass funeral for some of the victims of the earthquake that devastated central Italy, in Ascoli Piceno, Marche region, Italy. Photograph: Massimo Percossi/EPA 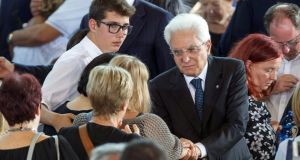 Italian President Sergio Mattarella consoles a woman after a funeral service for victims of the earthquake inside a gym in Ascoli Piceno, Italy. Photograph: Adamo Di Loreto/Reuters

The names were read out, one by one - Alberto, Clara, Giorgia, Pietro, Lucrezia, Marisol and 29 others.

The litany of names seemed to accentuate the sense of pain, sorrow and loss, as Italy today paid its respects in a solemn funeral in Ascoli Piceno to 35 of the 290 people who died in last Wednesday’s earthquake.

This was arguably the most moving moment in one of those typical public occasions when the private and the public, the bereaved relative and the politician, cross paths.

As grieving families huddled around the coffins of their loved ones at the front of the improvised centre of worship in a gym on the outskirts of Ascoli, behind them sat state President Sergio Mattarella, prime minister Matteo Renzi and two rows of mayors from all of those small towns from Le Marche which have been effected by this tragedy.

At the end of the service, both President Mattarella and the prime minister moved forward to talk to the relatives.

One young man looked for a moment at President Mattarella and then collapsed into his arms, crying his eyes out.

In his homily, the Bishop of Ascoli, Msgr Giovanni D’Ercole, urged people “not to lose heart”, promising that “Together we will rebuild our houses and our churches”.

He said: “Oh lord, what do we do now? How many times in the agitated silence of these nights of vigil and waiting have I asked God the same question, a question that many of you put to me in these last days...Don’t be afraid to shout out your sense of suffering but do not lose courage...”

Each of the coffins tells its own painful tale. There are the coffins of Clara and Pietro, both adorned by the same picture of an elderly couple smiling and enjoying a glass of wine on a sunny evening on their garden terrace. There will be no more such evenings for them.

Then there’s the coffin of nine-year-old Giulia, beside which sit her distraught parents, her mother with her leg in plaster and her father with a distant shellshocked look. On the coffin, there is note from Andrea, one of the L’Aquila firemen who worked in the rescue operation: “Sorry Giulia, sorry we did not arrive in time.”

As people shuffled around in this overheated, stuffy sports hall where some of the bodies gathered after the quake had begun to smell, the experience must have seemed like another day in hell for the relatives.

Funerals like this become media events, with people attending out of curiosity as much as out of a sense of solidarity.

One person in particular who was clearly able to sympathise and empathise with the relatives was Agnese Renzi, wife of the prime minister. A firm believer, Ms Renzi sat in silence, head bowed, hands on her face for a long time before she too spoke quietly with some of the relatives.

Even as the funeral service was taking place, another person died in hospital. Furthermore, on Saturday, another six bodies were pulled from the rubble in Amatrice, the town which has paid the highest toll in this disaster, with 223 dead.

Back in the centre of Ascoli, on looking out the window, a wedding party drives past. In mezzo al cammin di nostra vita...there is apparently still hope.

President Mattarella had flown in by helicopter to Amatrice on Saturday to see the damage for himself before travelling on to the nearby city of Ascoli Piceno for the funeral service.

Some 35 varnished wood coffins were lined up in sports hall, including white caskets containing the remains of two of the 21 children killed in the disaster. The youngest victim was five months old. The oldest was 93.

Foreigners who died in the calamity included six Romanians, three Britons, a Spanish woman, a Canadian and an Albanian.

The area is popular with vacationers and local authorities are still struggling to pin down how many visitors were there when the quake hit.

Mourners gathered in Ascoli Piceno hours before the service was due to begin to pay their respects.

“Even if I didn’t know them my heart broke for them. My thoughts are with them because there are people who have lost everything, homes, loved ones,” said local resident, Luciana Cavicchiuni.

“These things should not happen,” she said.

Most of the buildings in the quake zone had no anti-seismic protection, but even some of those that did, including a school in Amatrice that was renovated in 2012, fell apart.

Magistrates have opened an investigation into some of the incidents, including the collapse of a belltower in the town of Accumoli which smashed through the roof of an adjacent building, killing a family of four.

“What happened cannot just be considered fate,” said prosecutor Giuseppe Saieva, who is leading the inquiry. “If these buildings had been constructed like they are in Japan then they would not have collapsed,” he told la Repubblica newspaper.

Mr Renzi has promised to rebuild the shattered communities and the mayor of Amatrice urged the government to learn the lesson of painfully slow post-quake reconstructions of the past.

“What we need is a reconstruction in record time. It is a great opportunity for politicians to show extraordinary commitment,” mayor Sergio Pirozzi told Mr Mattarella.

Aftershocks continued to rattle the area overnight, the strongest measuring a magnitude of 4.2.

Italy sits on two fault lines, making it one of the most seismically active countries in Europe. Almost 30 people died in earthquakes in northern Italy in 2012 while more than 300 died in the nearby city of L’Aquila in 2009.

1 Bickering wears down patience as government talks crawl forwards
2 George Floyd death: Clashes and curfews in many cities as protests sweep US
3 ‘I have no faith in the Catholic Church but I prayed when I’d Covid-19’
4 Over 300 church groups unite for online Irish Blessing video
5 Quarantine will cease within fortnight, Ryanair CEO claims
Real news has value SUBSCRIBE