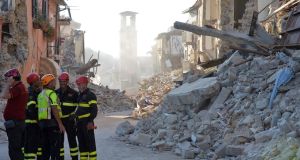 The names were read out, one by one: Alberto, Clara, Giorgia, Pietro, Lucrezia, Marisol and 29 others. On Saturday, Italy paid its respects to 35 of the 290 victims of last Wednesday’s earthquake, in a solemn funeral in Ascoli Piceno.

The litany of names was arguably the most moving moment in one of those typical public occasions when the private and the public, the bereaved relative and the politician cross paths.

As grieving families huddled around the coffins of their loved ones at the front of the improvised centre of worship in an indoor sports stadium on the outskirts of Ascoli, behind them sat state president Sergio Mattarella, prime minister Matteo Renzi and two rows of mayors from all of those small towns from Le Marche which have been affected by this tragedy.

As the politicians spoke to people, exchanging warm handshakes and serious grimaces, the relatives up front sat quietly, some seemingly numb, some clearly greatly distraught. When at the end of the service, one young man was comforted by president Mattarella, he simply collapsed into the president’s arms, crying his eyes out.

Each of the coffins told its own painful tale. For example, there were the coffins of Clara and Pietro, both adorned by the same picture of the elderly couple smiling and enjoying a glass of wine on a sunny evening on their terrace.

Then, too, there was the coffin of nine-year-old Giulia, beside which sat her distraught relatives – her aunt with her leg in plaster and her father with a distant shellshocked look.

On the coffin, there was a note from Andrea, one of the L’Aquila firemen who had tried and failed to rescue her: “Ciao piccola. I helped pull you out of that prison of rubble, sorry we did not arrive in time.”

Speaking after the Sunday Angelus prayer in St Peter’s Square, the pope said “I want to renew my spiritual solidarity with the inhabitants of Lazio, Le Marche and Umbria, so hard hit by the earthquake of a few days ago.

“In particular, I am thinking of the towns of Amatrice, Accumoli, Arquata, Pescara del Tronto and Norcia . . . the church shares your suffering and your worries. Let us pray for the dead and for the survivors.

“Dear brothers and sisters, as soon as is possible, I too hope to visit you, to bring to you in person the comfort of the faith, the embrace of the Father and the Son and the support of Christian hope.”

At this point, it is unclear when Pope Francis will visit the earthquake zone but historical precedent would suggest that it will take place within the next month.

Benedict XVI visited L’Aquila 22 days after the April 2009 earthquake in which 308 people died.

In the town of Amatrice, where 223 people died, a 3.7-magnitude tremor at about 3pm caused further damage to the Romolo Capranica primary school without, however, injuring anyone.

The Romolo Capranica school is sure to feature large in the investigation into illegal building in the area, an investigation which was opened last week by the state attorney’s office in Rieti.

At the moment, the death toll stands at 290, with 2,500 people homeless and anywhere between 15 and 20 people still missing.

On Tuesday, the Bishop of Rieti will preside over an open-air funeral mass in Amatrice for the victims from both Amatrice and nearby Accumoli.

This funeral service will take place without coffins, given that some families have already taken away the coffins of their relatives to be buried elsewhere.