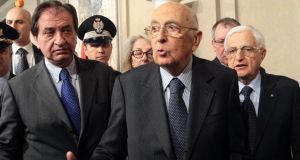 Five weeks after last month’s inconclusive general election, Italy seems no closer to resolving its ongoing government crisis. In what looks like a desperate last throw of the dice, state president Giorgio Napolitano on Saturday appointed two committees of so-called “wise men”, calling on them to find common ground between political forces in the areas of institutional reform and socio-economic policy.

Mr Napolitano’s unprecedented move comes in the wake of the failure last week of Democratic Party (PD) leader, Pier Luigi Bersani, to form a government, despite a week of consultations with social partners and political parties.

Given that the PDs emerged as the largest party at last month’s election, the president might have been tempted to simply call for the dissolution of parliament in readiness for a new election.

Firstly, Mr Napolitano’s seven-year mandate runs out on May 15th, meaning he is now in the so-called “white period” when he does not have the constitutional right to dissolve parliament. Secondly, many commentators believe another election, with the current unsatisfactory electoral legislation still in force, would prove equally inconclusive.

Lateral thinking
As in November 2011, when he appointed outgoing technocrat prime minister Mario Monti in the face of the threat of Italian economic collapse, Mr Napolitano has come up with an unusual solution.

Faced with a stalemate situation in which the three major political forces – the PDs, the People of Freedom (PDL) party of media tycoon Silvio Berlusconi and the Five Star protest movement of ex-comedian Beppe Grillo – appear unable to come to any agreement, he has called in two “committees”, urging them to find some common ground.

These two groupings, involving 10 men in all and immediately labelled “the wise men” by the media, include institutional figures (such as the president of the Constitutional Court, Valerio Onida) and politicians (such as Gaetano Quagliariello of the PDL and Luciano Violante of the PDs).

Relief shortlived
Mr Napolitano’s announcement was met with relief on Saturday since, in the wake of Mr Bersani’s failure to form an administration, several media sources had reported that the president was about to resign. His resignation would have hastened the appointment of a successor with a full constitutional prerogative to dissolve the parliament.

Mr Napolitano, however, confounded such speculation, saying he would see out his mandate while pointing out that Italy was not currently without a government, since Mr Monti remained in office in a caretaker capacity.

Relief, however, soon passed into frustration at the “wise men”, with senior figures in both the PDL and the PD arguing yesterday that they were highly unlikely to succeed where others before them had failed.

On top of that, former European commissioner, Radical party veteran Emma Bonino, yesterday lamented the fact that the groups were unrepresentative, being made up only of “old men”, with no women or young people included.