Italian investigator says pope could be target of Calabrian Mafia 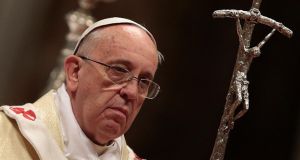 Pope Francis at St Peter’s Basilica at the Vatican yesterday. The investigator says the pope has asked his council of cardinals to overhaul the entire structure of the Vatican, including a review of the its economic affairs. Photograph: Tony Gentile/Reuters

At first glance it sounds like a cliche any aspiring Dan Brown might concoct, that Pope Francis’s reforming zeal may have made him a target of the ’Ndrangheta, the Mafia in Calabria in southern Italy.

Senior Calabrian Mafia investigator Nicola Gratteri, whose investigative zeal has forced him to live with police protection since 1989, has said the pope’s plans to reform Vatican structures, including the Vatican bank, the IOR, could prove a problem for the ’Ndrangheta, Italy’s most powerful Mafia.

He said that while Pope John Paul II called on the “military” mafiosi to “repent” in 1993, Pope Francis has gone further, perhaps hitting the ’Ndrangheta where it hurts.

“He has named his G8 [council of cardinals] to overhaul the entire structure of the Vatican, including a review of the Vatican’s economic affairs and in particular, the IOR,” Gratteri says.

“For those with real economic power it is obvious this could be a huge disadvantage . . . Given that in the past we’ve had collusion at the highest level between church and Mafia, this exposes the pope.”

Gratteri says he has no information on any possible attempt on the life of Pope Francis. He is merely following a line of reasoning based on years of observing and recording Mafia-church collusion in Italy, collusion many believe has seen the IOR involved (knowingly or not) in Mafia money-laundering.

Gratteri has outlined his theories in a new book, Acqua Santissima (Most Holy Water), which traces the ’Ndrangheta’s relationship with the church from the middle of the 19th century.

In it he writes about “good priests and bad priests”, the latter including cocaine mules and gun-toting clerics involved in shoot-outs.

The book also highlights the public moments in Calabrian life when organised crime becomes involved in religious iconography, be it “recruitment” ceremonies or the procession of the local saint around the village. He also writes about the ’Ndrangheta’s annual general meeting, which takes place at the shrine of the Madonna della Montagna in Polsi in Calabria.

Every year a group of casually dressed men, not all Italian, turn up there on what looks like a golf outing. They are members of “la Commisione”, the de facto governing board of the ’Ndrangheta.

Gratteri argues that men such as these care little for Francis’s call for a “church of the poor” or for his observation that “St Peter did not have a bank account”.