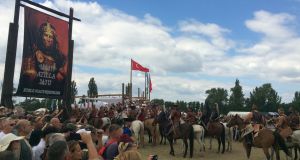 A portrait of Attila the Hun watches over Hungary’s Kurultaj festival of ancient Turkic cultures and traditions. Photograph: Daniel McLaughlin 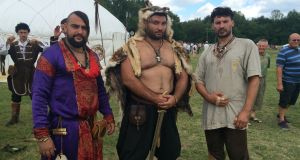 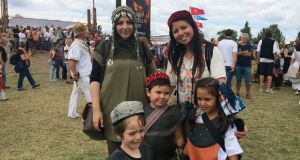 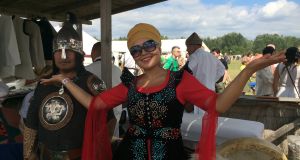 Every second summer, the outskirts of the village of Bugac resound to beating drums, whipcracks, traditional Turkic music and the rumble of galloping hooves as people and horses gather in the dusty steppe of central Hungary.

Many come clad as if ready for medieval battle, in leather and metal armour and wielding swords and shields, while others carry banners and strike resonant metal “singing” bowls that bear strange runic symbols.

They are here for Kurultaj, billed as “a tribal assembly of the Hun-Turkic nations, a celebration of the preservation of (their) ancient traditions”, which last weekend drew more than 250,000 people from as far apart as the Balkans, the Caucasus and central Asia.

Groups representing some 27 nations re-enacted battles and performed displays of everything from horsemanship, hand-to-hand combat and archery, to folk singing, dancing and shamanic fire and drumming rituals.

A bare earth arena, where the mock fights and high-speed horseback shows took place, was flanked by the bright flags of all nations present and yurts, stages and stalls, all presided over by huge portraits of a glowering Attila the Hun.

“We’ve been here several times and it’s a great event,” said Petar Vladov, a Bulgarian in a purple, red and gold tunic, whose sword-carrying friend wore an animal skin draped over his head and bare torso.

Reihan and Fazana, two ethnic Uzbeks from Germany, wandered through the throng with their three young children, who wore leather jerkins trimmed with fur and carried small bows slung over their shoulders.

“We’ve been to Kurultaj before as well,” said Reihan. “Our husbands are demonstrating how ancient Turkic tribes used to fight.”

The vast majority of visitors were Hungarians however, and Kurultaj is inspired by a theory that their ancestors – the Magyar – originated in central Asia and have deep historical, cultural or even genetic links to other nations from that region.

The Magyar settled in Europe in the late ninth century, more than 400 years after Attila’s death had triggered the collapse of Hun control over a swathe of central and eastern Europe.

In Hungarian myth and folklore, however, the idea persisted that the Magyars were descendants of the Huns, a theory that helped explain a language and some cultural traits that share little with those of their Slavic neighbours.

This movement, known as Turanism, gained popularity in the 19th century as Hungarians sought to break from the Germanic Habsburg empire and resist rising pan-Slavism across central Europe and the Balkans.

Turanism implied Hungary had a host of ancient and “natural” eastern allies in the Turkic world, and linked its people to the epic figure of Attila, whose feats vastly outshone those of the obscure Siberian tribes that the rival “Finno-Ugric” theory held to be the Hungarians’ ancestors.

Turanism also highlighted how parts of Hungarian society had long fared better with the Muslim Ottomans than the Catholic Austrians.

In the 16th and 17th centuries, Hungarian protestants living under Ottoman rule in Transylvania enjoyed great religious freedom, in stark contrast to the persecution suffered by their co-believers in Habsburg lands.

After Hungary fought for independence from the Habsburgs in 1848-9, several senior revolutionaries and their soldiers found refuge in the Ottoman empire; during the 1912-13 Balkan wars some Ottoman troops fled to Hungary, and in the subsequent first World War the Ottomans and Austria-Hungary were allies.

Belief in a lost but glorious eastern past – and hostility to Israel and to liberal US and European powers which it sees as Hungary’s perpetual oppressors – even wove a surprising pro-Muslim thread through Hungary’s far-right Jobbik party.

While calling refugees and migrants from the Islamic world a threat to Europe’s security and identity, however, Orban is still pursuing an economic “eastern opening” to boost Hungary’s trade with the Middle East and other regions.

And while sponsoring lurid billboards and radio announcements warning of the dangers posed by the mostly Muslim asylum seekers, Orban’s government also funds Kurultaj alongside Muslim states like Turkey and Azerbaijan.

“Kurultaj is about a time before Christianity and Islam, when the Huns and the Turkic peoples were pagan brothers,” said Szabolcs Molnar from near Budapest, who wore a traditional Hungarian embroidered shirt, baggy black trousers and a fur-trimmed felt hat.

“Now, in this time of trouble, it’s good to remember where we all come from, and the ancient things we have in common.”