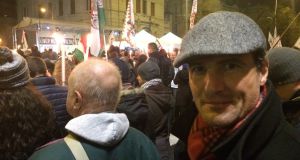 Marton Gyongyosi, a Trinity-educated leading member of Hungary’s nationalist Jobbik party, at a protest in Budapest on Friday

Hungarians briefly put aside deep political differences on Friday to protest together against an alleged government-backed attack on the nationalist Jobbik party, which could stop it competing in parliamentary elections next spring.

Jobbik, which is second in polls behind prime minister Viktor Orban’s populist Fidesz party, says it could not afford to campaign if the state audit office forces it to pay a fine of more than €2 million for alleged illegal financing.

The audit office is led by a former Fidesz deputy, and Jobbik and other opposition parties say the case shows how Mr Orban uses his influence over all major state institutions to attack his rivals and undermine the rule of law.

The perceived threat to Hungarian democracy prompted some liberals to join hundreds of Jobbik followers at Friday’s rally, despite their criticism of the party’s intolerance towards minorities and migrants and its Eurosceptic and Russia-friendly rhetoric.

“This type of money, €2 million, is something we just don’t have. It exceeds our budget . . . and if we have to pay this fine we won’t be able to enter the elections,” said leading Jobbik member Marton Gyongyosi.

“There is no question that this is a political campaign against Jobbik by Orban and Fidesz,” added Mr Gyongyosi, who graduated from Trinity College in 2000 and worked as an accountant in Dublin before entering politics. In 2012 he was criticised for urging the Hungarian government to draw up a list of Jews who could pose a security risk to the country.

As Fidesz has become more radical in its anti-immigration stance and clashed with the EU over government policy on civil society, education and the rule of law, Jobbik has sought to move from the far-right margins into the mainstream.

“We’ve had successful patch and this is clearly politically motivated and aimed at annihilating the only standing opponent to the regime,” Mr Gyongyosi told The Irish Times.

“We’ve seen lots of strange things in Hungary over the years . . . but never such a clear and ferocious attack on the system of democracy so that liberals – who are our fierce opponents on ideological grounds – are on our side on this issue.”

Leading members of the liberal Egyutt, Momentum and Politics Can Be Different parties said they would join Friday’s protest in central Budapest.

Viktor Szigetvari, the head of Egyutt’s national political council, said he suspected that Jobbik had indeed broken campaign financing rules by using discounted advertising space provided by a wealthy backer – but that Fidesz had done the same in previous campaigns with complete impunity.

“We are disturbed by this attack on our already broken freedom, because the selective application of the law is something unacceptable in a country that should be a functioning democracy with checks and balances,” he said.

“It’s not an easy decision,” he said of Egyutt’s presence at the protest.

“But given that this is an attack on freedom, we have to show solidarity on this issue.”

Mr Szigetvari rejected Jobbik’s claim to now be a mainstream party, however.

“They have not changed. On many issues they still represent the same intolerance, and the same eastern- and not western-oriented policies for Hungary. This is unacceptable for us.”

Surveys suggest Mr Orban will win the parliamentary elections comfortably, helped by fawning coverage from most major media outlets in Hungary and support from big businessmen who have profited from Fidesz patronage.

Mr Orban’s refusal to accept refugees in Hungary has widespread public support, and he deflects criticism over corruption and poor public services by denouncing the “meddling” of the EU and liberal billionaire philanthropist George Soros.

Hungarian prosecutors also recently charged Bela Kovacs, a Jobbik member of the European Parliament, with spying on EU institutions for Russia, in what his party called an attempt smear it before the election and distract from Fidesz’s own links with Moscow.

Dubbed “KGBela”, Mr Kovacs is known for his pro-Kremlin views. He lived in Russia for more than a decade before returning to Hungary in 2003 and becoming a key figure in Jobbik.

“They opened the investigation in 2014,” Mr Gyongyosi said of Mr Kovacs, who has now resigned from Jobbik.

“If he’s really a spy, what the hell have Hungary’s prosecutors and government and secret services been doing since then?”