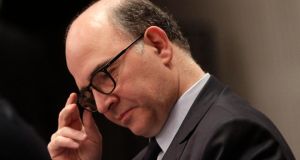 The international media investigation into offshore banks and tax havens could not have come at a worse time for French president François Hollande, two days after his former budget minister Jérôme Cahuzac admitted to having held bank accounts in Switzerland and Singapore for the purpose of tax evasion.

Among the more than 100 French taxpayers whose names appear in the 2.5 million documents of “OffshoreLeaks,” Le Monde found that of Jean- Jacques Augier, the millionaire publisher and champion of gay rights who was the treasurer of Mr Hollande’s presidential campaign last year. Mr Augier holds shares in two companies based in the Cayman Islands, a well-known tax haven.

Mr Augier is a graduate of two French grandes écoles , Polytechnique and the ENA, where he was in the “Voltaire” class with Mr Hollande and several other well-known public figures. He holds the prestigious rank of inspecteur des finances but left public service to run the G7 taxi company, which he left with a golden parachute of €11 million. He then moved to China, where he says fellow investors insisted a chain of bookshops and a consortium of travel agencies be based in the Cayman Islands.

Mr Augier told Le Monde he has neither a personal bank account nor personal direct investment in the Caymans, and has done nothing illegal. But the fact that a man so close to the French president invested in the Caymans at the moment the G20 declared war on tax havens is a further blow to the socialists’ image.


Rumours denied
The Cahuzac scandal overshadowed Mr Hollande’s state visit to Morocco over the last two days. One question has resurfaced continually: what did the president know and when? Interior minister Manuel Valls and the presidential Élysée Palace have denied persistent rumours that Mr Hollande commissioned a background memorandum from the domestic intelligence service DCRI because he doubted the sincerity of Mr Cahuzac’s denials. According to Le Point magazine, the Élysée knew of Mr Cahuzac’s foreign accounts before Christmas but did nothing.

At the very least, critics say, Mr Hollande should not have appointed to the crucial post of budget minister a plastic surgeon with a reputation as a wheeler-dealer, who had exploited a stint in the health ministry to land lucrative contracts with pharmaceutical companies.

Mr Hollande stands accused — in his own camp as well as by the right — of poor judgment at best, of covering up Mr Cahuzac’s lies at worst.

In January the tax section of the ministry of finance asked Swiss authorities if Mr Cahuzac had an account at UBS. The answer they received — that Mr Cahuzac had no account at UBS after 2006 (the earliest possible date under a Franco-Swiss agreement) — was leaked to the Nouvel Observateur and the Journal du Dimanche , which published the headline “Swiss clear Cahuzac”.

The finance minister Pierre Moscovici, who was Mr Cahuzac’s boss, is now under attack over the Swiss letter. It has since become known that Mr Cahuzac transferred funds from his UBS account to the lesser-known Banque Reyl in 2000. If the French finance ministry had not limited its inquiry to UBS the answer would have been different.

Conservative politicians now demand Mr Moscovici’s resignation. “Did Pierre Moscovici use his position to protect Jérôme Cahuzac, who was under his orders?” the UMP group leader Christian Jacob asked in the National Assembly. “Were the tax authorities used to impede justice and hush up this affair?”

In a new twist on the Cahuzac case, it has emerged that Mr Cahuzac’s first Swiss bank account was opened for him in 1992 by Philippe Péninque, a former lawyer and close friend of the National Front leader Marine Le Pen. Ms Le Pen accuses the socialist leadership of having known the truth about Mr Cahuzac for weeks.

“When one gets to such a fractured state, the people must be able to express themselves,” she said. “They have to drain the abscess through new elections.”