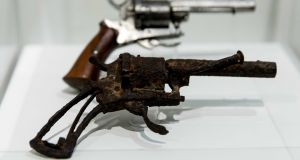 The weapon which the Dutch painter Vincent van Gogh supposedly used to kill himself – it is displayed as part of the exhibition On the Verge of Insanity: Van Gogh and his Illness at the Van Gogh Museum in Amsterdam, The Netherlands, on Tuesday. Photograph: Robin van Lonkhuijsen/EPA

The gun used by angst-ridden Dutch artist Vincent van Gogh to kill himself more than a century-and-a-quarter ago is to go on public display for the first time in Amsterdam this summer.

Van Gogh shot himself in the chest in the countryside outside Auvers-sur-Oise near Paris on July 29th, 1890. He managed to make his way back to the hostel where he was staying, but died there two days later, aged 37.

The weapon used by Van Gogh wasn’t found at the time. However, 70 years later – in around 1960 – a farmer working his fields discovered an old, heavily corroded weapon which had been in the ground for between 50 and 80 years. This was taken to be the gun that fired the fatal shot.

The weapon is typical of the time: a 7mm pinfire pocket revolver – known as a pistolet à broche – designed and manufactured by French gunsmith, Casimir Lefaucheux.

As luck would have it, say munitions experts, the tortured artist could hardly have chosen a more unsuitable weapon.

The pistolet à broche wasn’t taken seriously as a weapon which was likely to kill anyone – and for that reason was popular with shopkeepers of the time trying to frighten away thieves.

“Its limited firepower offers a possible explanation for why the bullet fired at such close range glanced off Van Gogh’s ribcage,” said the Van Gogh Museum, where the weapon, previously part of a private collection, goes on display.

“The bullet was deflected downwards and was lodged too deep to be removed without considerable danger – which is why Van Gogh died of his wounds some 30 hours later.”

The gun will be part of an exhibition entitled On the Verge of Insanity, opening on Friday and running until September 25th, which brings together some 25 paintings and drawings from the final 18 months of the painter’s life – and focus on his battle with mental illness.

The show includes several masterpieces on loan from museums abroad, mostly significantly the 1889 oil on canvas, Portrait of Doctor Félix Rey, which is on loan from the Pushkin Museum in Moscow for the first time.

Van Gogh was treated by Dr Rey in Arles after cutting off his left ear in 1888. He gave the physician the portrait as a gift, but Dr Rey disliked it so much he first used it to repair a chicken coop – and finally gave it away.

1 Fatal police shooting in Kentucky cuts to heart of community divisions
2 ‘Summer is not lost’ - Taoiseach announces accelerated easing of coronavirus restrictions
3 Coronavirus: People to be allowed to travel anywhere in their county from Monday
4 Donald Trump is in trouble, and that could spell very bad news
5 Pubs reopening will not mean ‘fellas having a few pints and peanuts’, Holohan warns
Real news has value SUBSCRIBE