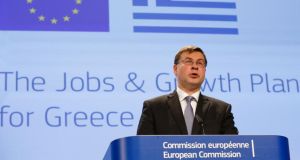 EU commissioner Valdis Dombrovskis, speaks at a news conference on Wednesday. He has confirmed the troika is to return to Greece for negotiations. Photograph: Julien Warnand/EPA

Negotiations on a third bailout package for Greece are expected to begin next week, with senior officials indicating that August 10th is the provisional date by which a memorandum of understanding between Greece and its creditors must be signed.

Greece faces a €3.2 billion repayment to the European Central Bank on August 20th, so the hope is that a three-year bailout package can be agreed ahead of that deadline.

All 28 member states on Friday signed off on a €7.16 billion, three-month bridging loan for Greece. This will allow the country to make a €3.5 billion payment to the ECB, due on Monday, and pay its arrears to the International Monetary Fund.

Euro zone finance ministers signed off on the deal during a conference call on Friday evening. Greece is due to receive the funds from the the European Financial Stabilisation Mechanism by Monday.

As Greece prepares to begin negotiations with creditors about the terms of a new bailout package, Valdis Dombrovskis, EU commissioner with responsibility for the euro, confirmed that the troika would return to Athens for the negotiations.

Negotiations had taken place in Brussels for the past few months at the request of the governing Syriza party.

“As regards debt, this question is certainly back on the agenda,” he said, pointing out that debt servicing costs for Greece were actually lower than in other euro zone countries, such as Italy and Portugal.

He said he had assuaged British concerns about contributing to a further Greek bailout through the EFSM fund.

Speaking at the national economic dialogue, Mr Noonan said Greece’s creditors had already agreed to re-examine the debt burden in the wake of the first review of its third bailout once it gets under way.

Asked whether Ms Lagarde was wrong, he said no and added that the IMF chief had participated fully in the talks.

“But the input from the IMF at our meeting of the eurogroup was that while nominal haircuts weren’t necessary, a reprofiling of Greek debt was necessary. So she’s repeating that,” Mr Noonan said.

Agreement had already been reached on that front, the Minister told reporters.

“What’s agreed is that after the first review of the manner in which Greece is implementing the third programme, then the issue of reprofiling Greek debt will be discussed.”