Lawmakers charged with belonging to criminal grouping involved in many offences 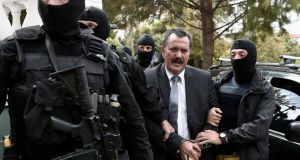 She first got into politics in Greece last year - when she claims she bought herself a bullet-proof vest and learned how to beat up immigrants with poles hung with the national flag.

Her training over, she was a full member of Golden Dawn, the far-right party whose rage against foreigners has propelled its stiff-arm saluting leader Nikolaos Mihaloliakos and 17 others into parliament in Athens in the wake of the Greek debt crisis.

A year on and the woman is Witness B, giving evidence used to arrest Mr Mihaloliakos and five fellow Golden Dawn lawmakers. They have been charged with belonging to a criminal organisation involved in many offences including the stabbing last month of a left-wing rap artist whose death has infuriated the government.

“Abusing immigrants was fun,” Witness B told prosecutors last month of her days riding with a party motorcycle gang, according to a partial transcript of testimony included in prosecutors’ indictment submission and seen by Reuters.

Defence lawyers challenge the testimony and the charges.

The party denies wrongdoing. Accusing the government of tactics not seen since the military junta of 40 years ago, it says it is being persecuted for its politics after standing up for ordinary Greeks against a corrupt elite that has bankrupted the nation and flung open its borders to cheap migrant labour.

Statements filed in court by purportedly penitent members of Golden Dawn paint the most detailed picture yet of the inner workings of a group that spent three decades on the far fringes of politics before becoming the fifth biggest party last year.

That picture is one of violence and intimidation not only against migrants, the testimony suggests, but also within the party - against dissenters or some who sought to leave. As such, the witnesses may be key to proving that Golden Dawn is a criminal organisation, people familiar with the case said.

No date or venue has been set for a trial of the six lawmakers, three of whom have been released on bail. They face 10 years in jail if convicted of criminal association.

A party supporter accused of killing the rapper during a street brawl is being tried for manslaughter with intent in a separate case; he says he was acting in self-defence.

“All this is nonsense,” said Pericles Stavrianakis, lawyer for Golden Dawn parliamentary spokesman Christos Pappas, who is among the six senior party officials charged. Stavrianakis said the witness testimony was “fake and made up”.

Reuters has not verified the witnesses’ identities. But prosecutors see their testimony as indicating that the party systematically planned or committed crimes over a period - a key test for convicting members of being part of a criminal organisation under a law targeting gang crime and terrorism.

Some witnesses also tell of members admiring Hitler, though the party denies it is neo-Nazi. Its swastika-style flag and its slogan “Blood, Honour, Golden Dawn” are reminiscent of Nazi symbols and ideas, but these are not illegal in Greece.

Voters seem to be turning away from Golden Dawn, though it remains a significant force. Opinion polls suggest its support has shrunk by a third in the past year, but still give it close to the 7 per cent it won in the June 2012 parliamentary ballot.

Like other protest movements across Europe, Golden Dawn - as well as the radical left party that came second in the Greek election - has seen support surge since the euro zone debt crisis destroyed jobs and incomes in much of the continent.

The speed with which prosecutors brought charges after the killing, and government moves that could hurt Golden Dawn’s finances, have prompted some Greeks to suspect political motives in the case against an anti-establishment challenger. It has used its 18 votes in the 300-seat legislature to call for Greece to cancel massive foreign debts, attack the European Union and expel illegal immigrants - all policies with widespread appeal.

Centre-right prime minister Antonis Samaras, who rules in coalition with the main centre-left party, has spoken out fiercely against Golden Dawn since the stabbing. And a new government bill would cut off public funds to parties if leaders are charged with felonies. But independent legal experts see little to suggest prosecutors have exceeded their authority.

“These were really unprecedented events, tackled in an unprecedented way, which many people found bizarre,” said Yannis Drossos, professor of constitutional law at Athens Law School.

“But bizarre is one thing and illegal is quite another. It was done quickly and decisively, but not in an illegal way.”

Mr Mihaloliakos, a 55-year-old former commando, founded the movement in the 1980s. The legal moves against him and his colleagues began after a street brawl in a working-class neighbourhood of Athens on Tuesday, September 17th, that left rap artist Pavlos Fissas dead.

Witness testimony indicates Fissas (34), whose songs often took aim at racism, left a cafe with a few friends after watching soccer on television. They were chased by about 15 men. Fissas was caught, beaten and stabbed twice.

Yiorgos Roupakias, a truck driver held in custody on a charge of manslaughter with intent, has pleaded that he acted in self-defence, his lawyer, Christina Tsabazi, said.

Court and police documents seen by Reuters show Roupakias told police in an initial statement that he was a Golden Dawn member but later said he had only a “loose” connection to the party. Phone records indicate he called a local party leader seven times that evening, including once before the incident.

There is no suggestion Mihaloliakos or other lawmakers were present that night in the capital’s Keratsini district.

But the outcry that followed the killing led to an order from Greece’s top court to investigate whether party members were involved in planning the violence and more than 30 other crimes. In that investigation, parallel to the direct probe into Fissas’s death, Mr Mihaloliakos and two others remain in custody.

Pavlos Sarakis, lawyer for parliamentarians Ilias Kasidiaris and Ilias Panagiotaros, said neither had any link to the stabbing and denied they were part of a criminal organisation:

“All these accounts are monstrosities, a figment of imagination, from witnesses who are serving a specific purpose, which is to criminalise Golden Dawn’s members of parliament and defame them in the public eye,” Sarakis told Reuters.

Mr Mihaloliakos denied the charges against him in a statement to prosecutors that was included in court documents seen by Reuters. His lawyer declined to comment on the testimonies.

He said Golden Dawn was not a neo-Nazi movement. Greeks still recall Nazi occupation in the second World War and Germany is a target of popular anger again over EU demands for austerity.

More than 400,000 people voted for Golden Dawn last year - over 20 times as many as in 2009. The criminal case being put together by investigating magistrates in Athens, however, focuses on the core of organisers and youth members who appear to number a few thousand nationwide and have been a small but vocal presence on the streets over the past decade or so.

Often clad in black and marching with flags, Golden Dawn activists broadened their appeal with eye-catching initiatives, from wrecking the stalls of immigrant street vendors to handing out free food - for Greek citizens only. Responding to concern that police were complacent, or even colluded with Golden Dawn, the government has now ordered another inquiry into the force.

Former party members who have come forward to testify to prosecutors in the criminal case against the lawmakers say they regret joining in violent initiation rites, indoctrination and military-style training with knives and sticks. At least one admitted to being party to violence against fellow members and others, according to transcripts of the testimonies.

It was unclear what, if anything, witnesses stand to gain from giving evidence. All have been given police protection.

One, Witness E, told prosecutors: “Some people exploited the need to belong, which many of us felt.”

In another court document, Witness A said party members threatened him and his family when he tried to quit: “It is easy to join,” he said. “But nearly impossible to leave.”

Witness B described a strict hierarchy. New recruits were not permitted to address senior members, on pain of beating. She herself was once made to do 30 push-ups and kicked in the ribs after protesting about jokes she said she found racist.

Witness C, who said he joined as a teenager six years ago, said he was punched and hit with sticks during his initiation into an upper echelon. He said he was trained to use heavy wooden batons, doubling up as flagpoles, as a weapon.

To be an elite street-fighter earned the title “Cerberus” - the “hell-hound” of Greek myth that guarded the Underworld.

Recalling “the faces of the people we tortured”, Witness C told prosecutors: “I still wake up at night and feel guilty.”

Witness E spoke of recruits being urged to read Hitler’s “Mein Kampf”, make Nazi-style salutes and support the overthrow of Greek democracy: “You have to prove blind devotion to the movement, to the leader, to the ideas of national socialism.”

Sarakis, the defence lawyer, said his clients deny that the party held any military-style training or carried out beatings:

“A criminal organisation operates in the dark, has secret members and engages in illegal activities,” he said. “This does not correspond to a political party that has taken part in elections and whose activities are in the open.”