Greece election: Neo-Nazi party still vocal despite its leaders being in jail 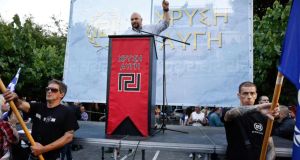 It’s doubtful whether the rally’s organisers intended the analogy, but the sight of rows of people staring at an empty stage and breaking into chants in response to the slightly muffled, staccato voice blaring out from the loudspeakers made it difficult not to compare the scene with something from a dystopian George Orwell novel.

The crowd, gathered in a hotel in the northern Greek city of Thessaloniki, had already stood to attention before the floor was handed over to the man they call the “leader”, Nikos Michaloliakos.

And by the time Golden Dawn’s imprisoned boss had finished his speech 20 minutes later, most of them were still on their feet.

“Golden Dawn will become the country’s third political force in the elections on January 25th,” Michaloliakos told the rally over the phone from his Athens prison cell.

Lashing out at the government and the election favourite Syriza party, he claimed his party was the target of a “political conspiracy”.

Unlike the two election campaigns in 2012, when the party’s spokesman assaulted a woman opponent on live television, Golden Dawn is barely visible in this contest – although like all contestants it does enjoy allocated slots for party political broadcasts on all TV channels.

“Golden Dawn has maintained much of its popularity because unfortunately none of the political reasons that led people to vote for them has disappeared,” says journalist Dimitris Psarras, an expert on the party.

“Greece has experienced not only an economic crisis but a universal collapse of the political system, where large segments of the population no longer trust the media or democratic institutions such as the justice system.”

A survey published on Wednesday put Golden Dawn in fourth place, on 4.6 per cent. Given the reluctance of voters to admit to supporting the party, many expect it to perform better on election day, as happened in the European Parliament elections, when it won 9.4 per cent and had three MEPs elected.

“Golden Dawn’s violent activities were directed by a core of a few hundred members, organised like a militia. So when the ‘leader’ and the hierarchy were jailed, there was a dramatic decrease in night-time attacks and assaults on migrants,” he says, underlining that this demonstrates the importance of treating the party as a criminal organisation.