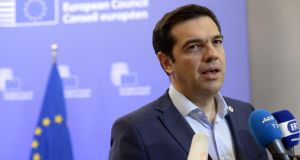 Below are the main points of the Euro Summit statement from Brussels, dated 12th July 2015. In brackets is the Eurogroup draft proposal text, where different.

1. “where ever possible a similar request to the IMF ... Greece will request continued IMF support from March 2016” (“Full involvement of IMF ... a precondition for the Eurogroup”)

2. “streamlining of the VAT system and the broadening of the tax base to increase revenue” (IDENTICAL)

7. transposition to national law of the European directive on bank recovery and resolution (BRRD) to wind-up financial institutions “with European Commission assistance” (IDENTICAL)

8. Only when these measures are implemented immediately by Greek parliament can talks begin for a Memorandum of Understanding (MoU) (IDENTICAL)

10. “ambitious pension reforms and specify policies to full compensate for the fiscal impact of the Constitutional Court ruling on the 2012 pension reform” (ruling struck down pension reform) (identical)

11. “more ambitious market reforms ... including Sunday trade, sales periods, pharmacy ownership, milk and bakeries, except over-the-counter pharmaceutical products which will be implemented in the next step...” (IDENTICAL)

12. “proceed with privatisation of the electricity transmission network operator” (IDENTICAL)

13. “reviews of collective bargaining, industrial action and collective dismissals ... in line with European best practices ... with the goal of promoting sustainable and inclusive growth” (IDENTICAL)

16. “Develop a significantly scaled-up privatisation programme with improved governance ... The monetisation of the assets will be one source to make the scheduled repayment of the new loan of ESM and generate over the life of the new loan atargeted total of EUR 50 bn of which 25bn will be used for the repayment of recapitalisation of banks and other assets and 50% of every remaining euro (i.e. 50% of EUR 25 bn) will be used for decreasing the debt to GDP ratio and the remaining 50 % will be used for investments. This fund would be established in Greece and be managed by the Greek authorities under the supervision of the relevant European Institutions.”

(“develop a singifincantly scaled up privatisation programe with improved governance ... valuable Greek assets of (EUR 50 bn) shall be transferred to an existing external and independent fund like the Institution for Growth in Luxembourg to be privatised over time and decrease debt. Such fund would be managed by the Greek authorities under the supervision of th relevant European institutions.”)

17. Reform public administration with a progrmame, under European Commission auspices, for “capacity-building” and “de-politicising” the Greek administration (IDENTICAL)

18. “the government needs to consult and agree with the institutions on all draft legislation in relevant areas with adequate time before submitting it for public consultation or to Parliament” (IDENTICAL)

19. “The Eurogroup takes note of the possible programme financing needs of between EUR 82 and 86 billion as assessed by the institutions.” (IDENTICAL)

20. “The Eurogroup takes note of the urgent fundraising needs .. estimated to amount to EUR 7 billion by 20 July and an additional EUR 5 billion by mid-August” (IDENTICAL)

21. Euro Summit invites the Eurogroup to discuss clearing Greece’s IMF and Bank of Greece arrears “as a matter of urgency” (IDENTICAL)

22. “establishment of a buffer of EUR 10 to EUR 25 billion for the banking sector ... to address potential bank recapitalisation needs and resolution cost of which EUR 10 billion would be made available immediately in a segregated account at the ESM (bailout fund) (IDENTICAL)

23. “serious concerns about sustainability of Greek debt ... due to the easing of policies during the last twelve months which resulted in the recent deterioriation in the domestic macroeconomic and financial” environment (IDENTICAL)

24. “Eurogroup stands ready to consider possible additional measures to smoothen Greece’s debt servicing pathe even further, if necessary, ... including possible longer grace and repayment periods ...conditional upon full implementation of the measures to be agreed...” (IDENTICAL)

25. “The Eurogroup stresses that (nominal) haircuts on the debt cannot be undertaken” (IDENTICAL)

26. “Greek authorities reiterate their unequivocal commitment to honour their financial obligations to all their creditors fully and timely” (IDENTICAL)

27. ABSENT IN FINAL AGREEMENT (“In case no agreement could be reached, Greece should be offered swift negotiations on a time-out from the euro area, with possible debt restructuring”)