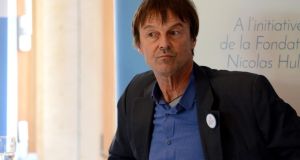 Nicolas Hulot, the French president’s envoy, said there was a new awareness on the part of the world’s two biggest sources of greenhouse gas emissions. Photograph: Frederic Stevens/Getty Images

When asked what is at stake in next December’s COP 21 conference on global warming, Nicolas Hulot quotes a participant at a recent climate change gathering in Morocco.

“In Paris, you will decide who will live or die,” the woman told Hulot, who is French president François Hollande’s special envoy for the protection of the planet.

The UN’s 21st conference on climate change will take place in Paris from November 30th to December 11th. The French government has declared it a Grande cause nationale and expects to receive 47,000 people at the conference centre at Le Bourget.

The Paris gathering has raised hopes that world leaders will at last make a serious move towards a de-carbonised world. They’ve set themselves the goal of limiting the rise in the Earth’s temperature to 2 degrees in this century.

To do this, they would have to reduce greenhouse gas emissions by between 40 and 70 per cent over the next 35 years.

The other chief goal of COP 21 is to secure financing for the Green Climate Fund, which was supposed to provide $100 billion (€89.4 billion) annually to help developing countries adapt to climate change.

If carbon emissions continue unchecked, average temperatures could increase by 4.8 degrees in this century, says the UN’s Intergovernmental Panel on Climate Change. The level of the world’s oceans could rise by up to 98cm.

French scientist Jean Jouzel, a co-laureate of the 2007 Nobel Peace Prize for his work on climate change, outlined the impact of unchecked global warming at a June 4th seminar of the Economic, Social and Environmental council (CESE) in Paris.

“All the red lights are flashing,” Jouzel said. Effects of global warming include acidification of oceans, destruction of coral reefs, extreme weather, refugees from climate change, threats to food security, and biodiversity, and pollution.

“We are clearly headed for a darker future,” said Dominique Bourg, a professor at the University of Lausanne. “We will need a miracle to reach the 2 degree target.”

A report submitted by the UN Framework Convention on Climate Change to negotiators in Bonn this week said there will be substantial risks to the environment if temperatures rise more than 1.5 degrees.

“Between 1970 and 2010, half of the world’s mammals, birds, reptiles, amphibians and fish disappeared,” Bourg noted, quoting the World Wildlife Fund.

Other speakers saw opportunity in the dire situation.

“For the first time in the history of the world, there is a threat that concerns everyone,” Hulot said. “It’s possible we’ll pull together like a small, shipwrecked family in an infinite universe. This is our moment of truth. The only thing we recycle well are words and speeches; the same ones have been going round and round for 25 years.”

“The US military now considers climate change to be a threat on a par with terrorism,” he said. And in China, air pollution has reduced life expectancy by five years, putting huge pressure on the government.

“It’s unprecedented that Washington and Beijing will make commitments in Paris,” Hulot said.

The world doubles its consumption of energy every 25 years, said astro-physicist Hubert Reeves. “Today, each one of us uses the energy equivalent to 100 Roman slaves every day. Obviously, we will have to undergo major lifestyle changes. We won’t take airplanes at the drop of a hat.

“The important thing,” he added, “is not to be optimistic or pessimistic, but to be determined.”

In the run-up to COP 21, the engagement of the public, religious leaders and business community may be the greatest cause for optimism.

Pope Francis, for example, is expected to publish an encyclical on “human ecology” at the end of June. At the Paris Business and Climate Summit last month, 25 worldwide business networks representing some 6.5 million companies appealed to policy-makers to enact carbon pricing and eliminate fossil fuel subsidies, which amount to $550 billion (€492 billion) annually.

The war on climate change has become fashionable. The French post office and railway companies boast of their green credentials. The French insurer Axa has promised to shed €500 million in coal investments while tripling its green investments to €3 billion.

This week, home furnishing group Ikea said it would spend €1 billion on wind power, solar energy and helping those most affected by global warming.

1 Woman stranded in Ireland due to pandemic has ‘miracle baby’
2 Covid-19: Critical cases from NI could put pressure on services in Republic
3 Australia demands answers after women taken from Qatar Airways flight and strip-searched
4 US election: ‘Donald Trump needs to go. White America got what they want’
5 Covid-19: Public urged to ‘stay at home’ as 1,025 further cases confirmed in State
Real news has value SUBSCRIBE