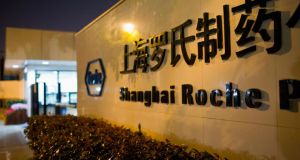 British drug-maker GlaxoSmithKline has confirmed that it received a secretly filmed sex tape of its former China chief, Mark Reilly, in March last year, the latest twist in an increasingly murky corruption investigation in China.

Mr Reilly has been accused by the Chinese government of ordering staff to bribe doctors and hospital officials to use GSK products, using up to three billion yuan (€350 million) channelled through travel agencies.

Mr Reilly and two Chinese executives at Britain’s biggest drugmaker, Zhang Guowei and Zhao Hongyan, were also suspected of bribing officials in the industry and commerce departments of Beijing and Shanghai.

The men could face decades in prison. Mr Reilly is barred from leaving China and his whereabouts are unknown.

“The issues relating to our China business are very difficult and complicated,” the company said in a statement, adding that it was continuing to co-operate with the Chinese authorities.

Britain’s biggest drugmaker said it was unaware of who shot the video of Mr Reilly and his Chinese girlfriend, or with what motivation, although it was apparently shot without his knowledge and mailed to senior executives at the company.

The couple were subsequently arrested by Chinese authorities in August last year and have been accused of selling personal information of people to clients through research companies.

The charges against the British executive caused shock waves among the business community and sparked fear among foreign managers in China, who are worried they could be jailed and have asked their lawyers if they should temporarily leave the country, or even for good.

GSK has previously apologised for employees in China apparently acting outside of its internal controls, but has denied that the sums of money were anything like as high as those alleged to have been paid.

Glaxo is the maker of the world’s top-selling drug, the asthma treatment Seretide.