Germans are worriers, Irish among most carefree - survey 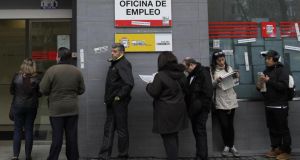 People wait outside an unemployment office in Madrid. The fear of being without work rose in seven of the 12 countries surveyed and was the top concern for 72 per cent of Spanish respondents and 69 per cent of French. Photograph: AP Photo/Andres Kudacki

Europeans are worried more about unemployment than any other social or economic problem, according to a new survey by the GfK market research group.

Though largely immune to the recent euro crisis, Germans remain Europe’s biggest worriers, the 12-country survey suggests, while the Irish and Swedes are the most carefree. Asked to name, without being prompted, the most pressing problems facing their country, respondents cited an average of two problems.

However, Germans named 2.5 problems on average, while the Irish and Swedes had just 1.2 concerns. Overall, some 37 per cent worried about unemployment – the top worry in all countries surveyed, except in the Netherlands and Russia, where people were most worried by economic stability and inflation respectively.


Irish concerns
Ireland’s recent economic trials are apparent in the results. Two-thirds of Irish respondents saw an urgent need to tackle problems of an economic or financial nature. One in four said more should be done to boost jobs, while one in five worry about unemployment. “This is not surprising,” the survey notes, as unemployment “more than tripled between 2005 and 2012, according to the OECD and lies at 14.2 per cent.”

The third-biggest concern in Irish minds, the survey suggests, is overall economic development – cited by 18 per cent of respondents. Just six per cent are concerned about state finances, while just four per cent see politics, inflation or crime as a problem. Given the collapse in house prices, it’s perhaps not surprising that housing concerns – in particular the cost of accommodation – comes out bottom of the top 10 concerns, worrying just three per cent of those quizzed.


Fear of unemployment
In the overall results, the fear of being without work rose in seven of the 12 countries surveyed and was the top concern for 72 per cent of Spanish respondents and 69 per cent of French.

Such fears clearly do not always correspond to the jobless rate: almost a third of Germans are concerned about unemployment, though unemployment in Germany is relatively low by European standards at seven per cent.

After unemployment, respondents were most concerned by, in order, inflation, economic stability, their health system, rents and housing, governance, pensions, education, corruption and crime. Concerns about terrorism or climate change didn’t make the top 10.

A new entry in the top 10 was corruption, due to the fact that 27 per cent of Spaniards were concerned by graft allegations surrounding the Rajoy government.