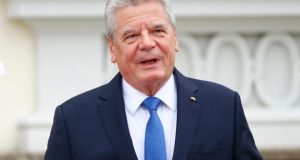 German president Joachim Gauck has warned that the euro crisis is contributing to the rise of “rampant anti-European populism” that endangers the European peace project.

Ahead of his three-day state visit to the Republic starting today, the German head of state called on all moderate forces around the continent to speak up in the current debate.

“We cannot let the sphere of public discussion be taken over by radical anti-European forces from the left or right,” said Mr Gauck.

After seven years of financial and euro crisis across the continent, Mr Gauck called for “more understanding for the different perspectives of our European partners [to] ensure that even when our opinions differ, we maintain a respectful, objective and productive exchange”.

Mr Gauck said the euro crisis was “in no uncertain terms putting all of Europe to the test” - from the EU, the euro zone and its member states right down to the everyday lives of individual citizens.

Given this, he expressed his “great respect” for Ireland’s efforts to work back from its economic crisis.

“I don’t underestimate the high price that many Irish have had to pay along the way,” said Mr Gauck, saying he was anxious to learn more about Irish reform efforts.

For a decade from 1990 Mr Gauck was the first custodian of the files which were left behind by the East Germany secret police, the Stasi.

Accompanied by his partner, Daniela Schadt, Mr Gauck will be greeted with military honours at Áras an Uachtaráin by President Michael D Higgins and wife Sabine Higgins.

This afternoon he visits the Garden of Remembrance followed by talks with Taoiseach Enda Kenny and a courtesy call on Lord Mayor Críona Ní Dhálaigh.

This evening President Higgins will host a State banquet for his German visitors.

He will call on both Houses of the Oireachtas, and inspect the Book of Kells and Trinity College library.

On Wednesday he heads west to accept an honorary doctorate from NUI Galway, visit the Irish Centre for Human Rights and deliver a speech.

After visiting the Burren and the Cliffs of Moher, Mr Gauck and Ms Schadt fly back to Berlin on Wednesday evening.