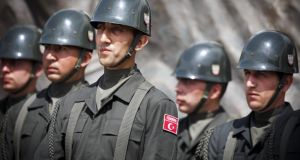 Just days before leaders and dignitaries from around the world descended on the rocky outcrop that is the Gallipoli peninsula, locals were busy tending to the thousands of rain-soaked Australians, New Zealanders and Turks here to mark history.

The hills above the peninsula’s western shoreline still bear the trenches and bunkers used by Ottoman Turk soldiers to keep Allied forces from taking the strategic Dardanelles Strait. For eight months in 1915 the defending troops held off Allied landing forces in a battle that resulted in more than 250,000 Allied and Turkish casualties. The campaign was one of the final causes for celebration by the forces of the beleaguered Ottoman Empire, which would collapse within three years.

Marking the victorious battle for Gallipoli each year is usually a chance for Turks to dust off their national pride with a glass of the alcoholic aniseed raki drink in hand. But on the occasion of its 100th anniversary, a fight broke out over the telling of Turkey’s history.

Some critics and liberals in Turkey argue a new Islamic blend of nationalism fostered by the ruling Justice and Development Party (AKP) government is attempting to revise what for decades has been a traditionally secular celebration.

Religion in the back seat

On the Gallipoli peninsula, bars and off-licences are common even in the rural villages.

With the creation of the Turkish Republic in 1923, Ataturk enshrined the young country’s secular identity in every aspect of the state, from its new constitution to the banning of fez hats for men and the introduction of the Latin alphabet.

However, the AKP, which has ruled Turkey for the past 13 years, has been accused of trying to alter the country’s historical identity by focusing on the Ottoman Empire’s Islamic traditions. In January President Recep Tayyip Erdogan claimed the Gallipoli battle was a “holy war”, even though evidence exists that soldiers drank beer.

The president proclaimed in 2013 that a new bridge over the Bosphorus Strait in Istanbul would be named after a 16th-century Islamic caliph responsible for persecuting Alevis, a large Shia minority. Last November he claimed Muslims discovered the American continent in the 12th century.

The Gallipoli war film Son Mektup (Last Letter), released last month, depicts victorious Turkish forces in Gallipoli but fails to portray the role of Ataturk in any form. Some Turks were angered that it received 1.75 million Turkish lira (€600,000) of funding from the ministry of culture and tourism, the most that ministry has ever released for a film.

Meanwhile, a television advert running last week to mark the Gallipoli campaign has stirred debate by showing soldiers praying and reciting the Muslim call to prayer, and Erdogan reciting a poem and praying in front of soldiers’ graves.

“[The] AKP has a chronic problem with Ataturk,” said Faruk Logoglu, vice-chairman of the CHP, the secular political party founded by Ataturk and which hopes to dent the AKP’s steamroller in June’s election.

“It exploits every opportunity to downgrade and denigrate Ataturk, if not directly, through attacks on his closest associate and second president of Turkey, Ismet Inonu. ”