French ministers fight among themselves over Roma

Interior minister accused of going ‘beyond what endangers the republican pact’ 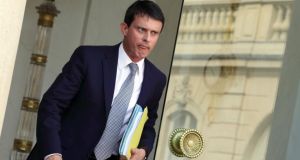 Hardline French interior minister Manuel Valls sparked nine days of government crisis when he said on September 24th that the Roma had a “way of life extremely different from our own” and alleged that only “a minority want to integrate”. Photograph: Reuters/Philippe Wojazer

Divisions within the government over France’s treatment of some 20,000 Roma dominated French politics all week, forcing President François Hollande to call his squabbling cabinet to order and leading prime minister Jean-Marc Ayrault to order that all interviews by government ministers be cleared with his office.

After heated exchanges between hardline interior minister Manuel Valls and ecologist housing minister Cécile Duflot regarding the Roma, Mr Hollande told a cabinet meeting: “I believe in collective debate, but it must take place within the government, not in public.”

Mr Valls sparked nine days of government crisis when he said on September 24th that the Roma had a “way of life extremely different from our own” and alleged that only “a minority want to integrate”.

Some 93 per cent of French people questioned in a BVA-Le Parisien poll said Roma “don’t integrate well” in France while 77 per cent said Mr Valls was right to say they should return to Bulgaria or Romania.

Vocal critic
France expelled a record 10,174 Roma during the first half of this year, Amnesty International reported last week.

Ms Duflot was the most vocal of Mr Valls’s critics within the government, saying that he had “gone beyond what endangers the republican pact”.

Sixteen deputies and senators signed an open letter supporting Mr Valls, who denounced Ms Duflot’s criticism as “unbearable” and accused her of “playing into the hand” of the extreme right-wing National Front.

Ms Duflot’s partner Xavier Cantat, the ecologist deputy mayor of a Paris suburb, tweeted on Thursday: “If I understand correctly, #Valls will have to get authorisation from #Matignon [the prime minister’s office] before making racist statements.”

Mr Hollande did not specifically name the ministers when he rebuked them. His speech was recorded and read out by the government spokeswoman after the cabinet meeting.

“This is the last time” members of government would disagree in public, Mr Hollande said; it was at least the third time that he evoked “the last time” this year.

Mr Valls is the most popular government member – 50 socialist candidates in next March’s municipal elections have asked him to campaign for them.

Mr Hollande seemed to side with Mr Valls against Ms Duflot when he told a reception for high-ranking military officers that gendarmes (who are defence ministry employees) “face another kind of crime, confronted by . . . elements who have often, but not always, come from abroad”.

Mr Valls makes provocative statements, followed by a backlash from the left of the socialist party, followed by rapid, massive validation in opinion polls.

Mr Hollande allows his ministers to defend opposing views while insisting on the need for unity, without ever taking a clear stand on the issue.

The president and prime minister said the government circular of August 26th, 2012, was proof of France’s “firm and humane” policy towards the Roma, but as Amnesty points out, the provisions of the circular have not been carried out by French officials.