About 60,000 people forced to leave homes ahead of attempt to defuse British explosive 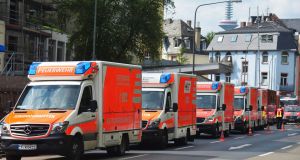 Ambulance cars queue during the evacuation of the ‘Citizens hospital’ in Frankfurt, Germany. Photograph: Bernd Kammerer/EPA

More than 100 patients were evacuated from two hospitals in Frankfurt on Saturday ahead of the planned defusing of a massive second World War bomb.

Some 60,000 people have to leave their homes early on Sunday in Germany’s biggest evacuation since the war while officials disarm the 1.4-tonne British bomb.

It was discovered on a building site in Frankfurt’s leafy Westend, where many wealthy bankers live.

More than 2,000 tonnes of live bombs and munitions are found each year in Germany, even under buildings. In July, a kindergarten was evacuated after teachers discovered an unexploded second World War bomb on a shelf among some toys.

Frankfurt fire and police chiefs said they would use force and incarceration if necessary to clear the area of residents, warning that an uncontrolled explosion of the bomb would be big enough to flatten a city block.

The HC 4000 bomb is assumed to have been dropped by Britain’s Royal Air Force.

The country was pummelled by 1.5 million tonnes of bombs from British and American warplanes that killed 600,000 people. German officials estimate 15 per cent of the bombs failed to explode, some burrowing six metres deep.

Three police explosives experts in Göttingen were killed in 2010 while preparing to defuse a 450kg bomb.

Frankfurt’s residents have to clear the area by 8am (7am Irish time) on Sunday and police will ring every doorbell and use helicopters with heat-sensing cameras to make sure nobody is left behind before they start diffusing the bomb.

Roads and transport systems, including parts of the underground, will be closed during the work and for at least two hours after the bomb is defused, to allow patients to be transported back to hospitals.

Air traffic from Frankfurt airport could also be affected if there is an easterly wind on Sunday. Also, small private planes, helicopters and drones will be banned from the evacuation zone.

Locals can spend the day at shelters set up at the trade fair and the Jahrhunderthalle convention centre. Most museums are offering residents free entry on Sunday, and a few of them will open their doors earlier than usual.