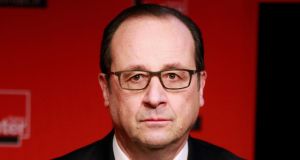 François Hollande. He telephoned Egyptian president Abdel Fatah al-Sisi to “renew the expression of his solidarity”

President François Hollande telephoned Egyptian president Abdel Fatah al-Sisi in the morning to “renew the expression of his solidarity” after Islamic State apparently decapitated 21 Egyptian Coptic Christians on a beach near Tripoli. The two leaders agreed to make a joint appeal to the UN Security Council to meet to discuss IS’s territorial gains.

Mr Hollande and defence minister Jean-Yves Le Drian both spoke of “the confidence that exists between France and Egypt”.

The arms contract, which includes 24 Rafale fighter bombers, one frigate, air-to-air missiles and cruise missiles, was negotiated in a record five months due to anxieties over the rise of jihadist groups in Libya and the Sinai desert.

“In the present context, it is very important that Egypt enjoy security and to be able to act for stability,” Mr Hollande said.

“Libya is just the other side of the Mediterranean, very close to us,” Mr Le Drian said before leaving for Cairo. “We must be very vigilant and ally ourselves with coalition countries like Egypt.”

France used the Rafale to help overthrow Muammar Gadafy in Libya in 2011, and to bomb Islamist targets in Afghanistan, Iraq and Mali. This is the first foreign sale of the plane, whose production represents 7,000 jobs in France.

The arms sale consolidates the shift in Egypt’s strategic alliances, which began when the US abandoned former president Hosni Mubarak in 2011. France and Russia – Egypt’s allies until the 1970s – have stepped into the void.

Mr al-Sisi tolerates no opposition and has silenced the media. The Egyptian police practice widespread torture and shoot demonstrators on sight.

Shimaa Al-Sabbagh, 34, an unveiled socialist poet and the mother of a young son, was shot dead in a demonstration on January 24th. The regime considers all members of the Brotherhood – perhaps one- third of Egypt’s population – to be “terrorists”.

“This regime governs through blind oppression,” said Le Monde’s front-page editorial. “It represents the very essence of the regimes which led to the ‘Arab Spring’, which Paris claimed to welcome.”

The French government refused to allow a Le Monde correspondent to cover the signing ceremony on Monday.