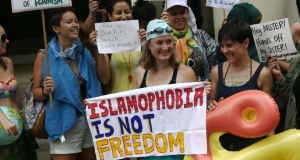 Protesters demonstrate against local bans in France of the burkini, outside the French embassy in London, Britain. Photograph: Neil Hall/Reuters

A French court will today rule on the legality of local “burkini” bans, which have drawn international criticism and exposed a rift in François Hollande’s government.

Human rights and anti-Islamophobia groups have asked the Conseil d’État, France’s highest administrative court, to overturn a ban on the full-body swimsuit which was imposed by the Mediterranean town of Villeneuve-Loubet.

The ruling will be binding and will affect at least 30 other coastal towns, mainly in southeast France, that have made similar decrees.

A decision to uphold the bans could have wide implications, by signalling to French mayors that they can ban the hijab in public places in the absence of any national law to that effect.

Socialist prime minister Manuel Valls defended the bans, saying France was locked in a “battle of cultures” and the “burkini” symbolised the enslavement of women.

His stance won support from the right-wing former president, Nicolas Sarkozy, who told Le Figaro magazine, in an article to appear today, that the “burkini” was “a political act” and “a provocation”.

Education minister Najat Vallaud-Belkacem dismissed Mr Valls’s claim that the bans were useful in France’s fight against Islamist militants, however, saying there was “no link between the terror attacks of Daesh (Islamic State) and the dress of a woman on the beach”.

The Villeneuve-Loubet order bars access to its bathing waters for anyone whose garments do not respect the principles of secularism and moral standards.

The Human Rights League and the Collective Against Islamophobia in France say the decree violates freedoms of dress, religious expression and movement.

Those opposed to the bans have taken some comfort from recent decisions and statements by the Conseil d’État.

In 2010, when Mr Sarkozy’s government was considering a ban on headscarves, the court said it was impossible to root such a ban in France’s secular model.