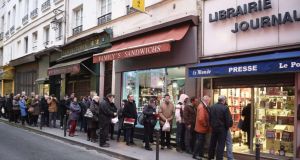 France has begun a crackdown on hate speech, arresting 54 people for anti-Semitism and defending terrorism in the past week.

In a message sent to all prosecutors and judges, the justice ministry laid out the legal basis for arresting those who defend the attacks that killed 17 people in three incidents in Paris last week. The circular also covers those responsible for racist or anti-Semitic words or acts.

Among those detained was Dieudonné, a controversial comedian who has convictions for racism and anti-Semitism. In a Facebook post that was swiftly deleted, the comic said he felt like “Charlie Coulibaly”, merging the names of Charlie Hebdo and Amedy Coulibaly, the gunman who killed four hostages at a kosher supermarket on Friday, a day after he killed a Paris policewoman. Dieudonné will stand trial for condoning terrorism, the news agency AFP reported, citing a judicial source.

The ministry said it was issuing the order to protect freedom of expression from comments that could incite violence or hatred. It said no one should be allowed to use their religion to justify hate speech.

The order also warned authorities to be particularly attentive to any incidents that could lead to urban unrest or violence against police, suggesting the government fears riots like the wave that swept parts of France’s suburbs a decade ago.

As the government planned its response to the attacks, which is expected to include broader laws on phone tapping and other intelligence gathering, Charlie Hebdo reappeared – if briefly – on news stands.

Huge demand prompted the paper to add an extra two million copies to its print run, bringing the total to five million. It will be distributed in 20 countries and translated into five languages.

As people queued from dawn at 27,000 points of sale across the country, Patrick Pelloux, one of the newspaper’s columnists, tweeted: “Shortages of Charlie Hebdo everywhere! Firstly, thank you, and rest assured we’re going to reprint and redistribute.”

On the Boulevard Saint- Michel in Paris, 86 of one kiosk’s allocation of 100 copies had been reserved; most of the people who queued from before 8am left empty-handed. At Saint-Lazare station, more than 60 people waited outside a newsagent before 6am.

The latest cover features a cartoon of the Prophet Muhammad shedding a tear while holding a sign that reads “Je suis Charlie” with the words “All is forgiven” in French above it on a green background.

Meanwhile, a leader of Yemen’s al-Qaeda branch claimed responsibility for the Charlie Hebdo attack, saying in a video the massacre came in “vengeance for the prophet”.

France has said it will send an aircraft carrier to the Middle East to work more closely with the US-led coalition fighting Islamic State (IS) militants. The French are already carrying out air strikes against IS, the group to which one of the Paris attackers claimed allegiance.

Since the attacks, France has deployed 10,000 troops and 120,000 security forces to protect sensitive sites, including Jewish schools and synagogues, mosques and travel hubs. The police are searching for suspected accomplices whom they believe are at large.