Foster families in Turkey under investigation over coup 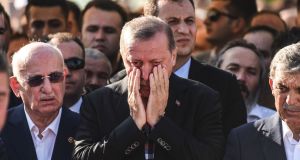 Turkish authorities are investigating foster families for suspected ties to a failed coup and may remove children from homes if their guardians are found to be supporters of the putsch, a government official said on Monday.

The government has so far detained or dismissed 125,000 people over alleged links to the network of Fethullah Gulen, a US-based Muslim cleric accused by Ankara of orchestrating the July 15th coup. Mr Gulen, who lives in self-imposed exile in the state of Pennsylvania, has denied involvement in the putsch and condemned it.

The scope of the crackdown has alarmed human rights groups and Turkey’s western allies who fear President Recep Tayyip Erdogan is using the coup as a pretext to curtail dissent. The government says its investigations are necessary to stamp out the influence of Mr Gulen’s network, which it refers to as the Gulenist Terror Organisation, or Feto.

“It would not be right for a child to remain with a (foster) family if links to Feto are confirmed as a result of the examinations,” said an official from the Ministry of Family and Social Policy.

The official, who declined to be identified, said the investigations had been ongoing since August 23rd.

“This is a slow process in which detailed examinations are being carried out. So it is out of the question for children to be suddenly ripped away from their families,” said the official, adding that the psychological health of the children was being closely monitored.

About 5,000 foster families and some related institutions are being investigated, reported the pro-government Yeni Safak newspaper. The government has also cut off co-operation with four childcare-related NGOs as part of its investigation, the newspaper said.

Mr Erdogan declared a three-month state of emergency immediately after the coup, allowing him and the cabinet to bypass parliament in enacting new laws and to limit or suspend rights and freedoms as they deem necessary.

The state of emergency, which has been extended once already, will continue as long as necessary, a deputy prime minister said on Monday, comments that could add to Europe’s worries about the recent trend in Turkish politics.

Last week European politicians voted for a temporary halt to EU membership talks with Turkey, citing Ankara’s “disproportionate” reaction to the coup over the past four months.

Luxembourg’s foreign minister said this month that Turkey’s handling of dismissed civil servants reminded him of methods used by the Nazis and that eventually the EU would have to respond with sanctions.

Such comments have infuriated Ankara, which has accused the EU of demonstrating a lack of solidarity following the coup. Mr Erdogan last week warned the EU that Turkey could unleash a new wave of migrants on Europe if relations deteriorated further.

Separately, authorities have opened a case against 50 coup plotters accused of attempting to assassinate Mr Erdogan on the night of the putsch, broadcaster NTV said on Monday. Of those, 47 are in jail and three are still being sought.

The suspects allegedly launched an attack on a hotel where Mr Erdogan was on holiday with his family in the southwestern resort of Marmaris. Having been tipped off that he was in danger, the president fled the hotel by the time they arrived.