Left-wing Syriza has boxed itself into a corner, says centrist Potami candidate 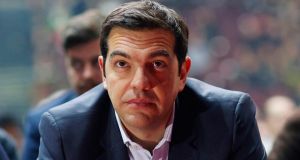 It may be a far cry from Oxford University, but as Pavlos Eleftheriadis sat down behind his new desk in a small, bare office in a start-up hub in central Athens, the law professor said he has no regrets about taking a break from his successful academic career for the rough and tumble of a Greek election campaign, his second in a year.

Eleftheriadis is running for To Potami (which translates as “The River”), a centrist party that, despite being barely a year old, opinion polls indicate is one of three contenders to become the parliament’s third largest grouping after next Sunday’s general election and, as such, a potential coalition partner for the winning party.

One of 18 Potami candidates running in central Athens, he professes to have “no idea” of what his chances are of electoral success in the sprawling, 14-seat constituency of half a million voters. The sheer size of the district can make it a shoo-in for candidates with a prominent media profile, something he freely admits he doesn’t have as a UK-based academic.

“I’m only a politician for three weeks and I’ve got nothing to lose. I don’t want a political career, but I want Greece to change. That’s why I can be so outspoken and take so many risks,” explains Eleftheriadis, as he recounts a recent article he published in Foreign Affairs entitled “Misrule of the few: how the oligarchs ruined Greece”.

“They control all the big newspapers and TV stations. There is no institutional protection of journalistic integrity. If you’re on their payroll, they can tell you to ‘write this’ and ‘do that’ and you will do it. The only way for journalists to survive is to play the game, leaving them totally exposed,” he says.

Also entangled in this mix, with all the legal and economic benefits this ensures, are professionals’ associations representing lawyers, doctors and engineers as well as public sector unions.

“It’s all a complex oligarchy. The channels of democracy are blocked. Those of us who are outsiders – young people, those on low pensions, the unemployed, women – have no way of expressing our demands and contributing to the political system. The political parties just don’t want to know. And they don’t need to know,” he continues.

His decision to join Potami was borne out of his determination to reform and regulate the relationship between the oligarchs and the media and to establish a strong social welfare system, something he says Greece never had but now so desperately needs.

According to a spate of opinion polls, Syriza is almost certain to win the election but may fall short of the overall majority it covets. On aggregate, last week’s 13 polls put Syriza at 34.7 per cent, which would not give it control of the 300-seat parliament, followed by conservative New Democracy (30.3 per cent), Potami (7), fascist Golden Dawn (6.2), orthodox communist KKE (5.6), Pasok (4.7) and nationalist Independent Greeks (3).

After the KKE, which wants Greece to exit the European Union and ditch the euro, angrily rejected Syriza’s coalition overtures, Independent Greeks remains the only party that Syriza has not ruled out. Virulent in its objection to the troika, the right-wing anti-austerity party claims it would protect “national and religious issues” in a Syriza-led government.

“Syriza has boxed itself into a corner of confrontation and they cannot be seen to agree with Potami as it would be viewed as a betrayal,” Eleftheriadis says. “But let’s see what happens after the election.”