Fears of deadlock at UN climate talks in Warsaw

Philippines envoy says some announcements ‘not conducive to building trust’ 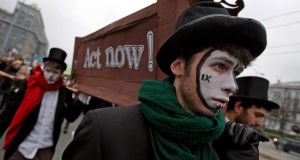 Gloom to match Warsaw’s overcast skies has descended over the UN’s 19th climate change conference, with little progress made during the first week despite the Philippines typhoon disaster and an impassioned plea for urgent action from its climate envoy, Yeb Sano.

Hundreds of climate activists braved the chill to march on Saturday from the city’s Palace of Culture past the National Stadium, where the conference is being held, to a rally in nearby Skaryszewski Park. Organised by Poland’s small Green Party, they carried a banner calling for “Social Justice and Positive Energy for Everyone”.

A dispirited Mr Sano, who has been on hunger strike to show his solidarity with the victims of Typhoon Haiyan, said public announcements by some countries about lowering their climate targets were “not conducive to building trust” in the negotiations, which are meant to lay the groundwork for a comprehensive global agreement in 2015 on how to tackle global warming.

Devastating impacts
“The world’s governments continue to disappoint citizens who are fighting against catastrophic climate change and its devastating impacts,” said Martin Kaiser, head of the Greenpeace delegation. “Instead of stopping new investments in coal mining and oil drilling, and investing in renewable energies, Japan and Australia have reneged on their voluntary pledges from 2010.”

Japan announced a downgrading of its target for 2020, from minus 25 per cent below 1990 levels to plus 3 per cent, which suggests it may do little or nothing on climate change in the next seven years, while Australia’s new right-wing new government proposed to repeal carbon pricing and remove subsidies for renewable energy; it is not even sending a minister to Warsaw.

Canberra’s decision was described as “puzzling” by former UN climate chief Yvo de Boer, now global adviser on climate change to consultants KPMG. He was quoted in the Guardian as saying: “I cannot remember a previous occasion when a major player in this process has not been represented at ministerial level at the high-level segment of the talks.”

Meanwhile, deforestation rates in Brazil increased by 23 per cent last year and Europe is “divided on future climate action and renewable energy due to the ongoing pressure from coal and nuclear industries”, as Mr Kaiser complained. A major coal industry summit opens today in Warsaw, with the Polish government’s support; 80 per cent of the country’s electricity is coal-fired.

One of the key issues developing countries want to see addressed is “loss and damage” due to disasters such as Typhoon Haiyan. Brazil has tabled proposals for a methodology to define the historical responsibility of countries for emissions. This is winning support – but not from developed countries, which fear it could result in massive payouts.

The lack of progress comes in the wake of a new assessment by the UN’s Intergovernmental Panel on Climate Change, which warned emissions would have to start falling now if there was to be any chance of achieving the agreed goal of limiting global warming at 2 degrees.