Two blasts - a car bomb and suicide bombing - have killed 38 people and wounded 155 outside a football stadium in Istanbul. Turkey said on Sunday that Kurdish militants may be responsible for this apparent coordinated attack on police. Video: Reuters 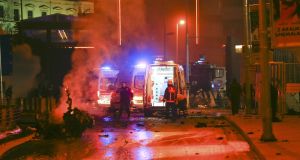 Police arrive at the site of an explosion in central Istanbul. Photograph: Murad Sezer/Reuters 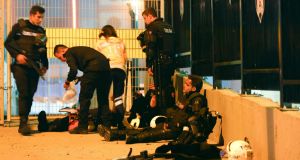 Turkish policemen at the site of an explosion in central Istanbul, Turkey, December 10, 2016. Photograph: Murad Sezer/Reuters, 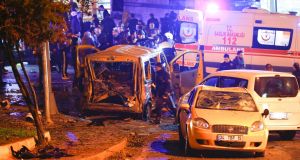 Police arrive at the site of an explosion in central Istanbul. Photograph: Murad Sezer/Reuters

Police cordoned off the area as smoke rose from behind the newly built Vodafone Arena Stadium, known colloquially as Besiktas Stadium after the local team.

Witnesses also heard gunfire after the explosions, which apparently targeted police officers, and at least 166 were reported wounded.

President Recep Tayyip Erdogan said in a statement: “We have once again witnessed tonight in Istanbul the ugly face of terror which tramples on every value and decency.”

There was no immediate claim of responsibility for the attack. This year, Istanbul has witnessed bombings attributed by authorities to Islamic State or claimed by Kurdish militants. A state of emergency is in force following a failed July 15 coup attempt.

Turkey is a partner in the US-led coalition against IS and its armed forces are active in neighbouring Syria and Iraq. It is also facing a renewed conflict with an outlawed Kurdish movement in the south east.

The first and larger explosion took place after home team Besiktas beat visitor Bursaspor 2-1 in the Turkish Super League. Without giving numbers, Mr Erdogan said the timing of the attack aimed to maximise the loss of life and vowed the nation would overcome terrorism.

“It is thought to be a car bomb at a point where our special forces were located, right after the match at the exit where Bursaspor fans had earlier left,” said Turkish interior minister Suleyman Soylu.

He told reporters in Istanbul the first explosion took place on a hill next to and overlooking the stadium. The second explosion struck Macka Park and was believed to be a suicide bomb.

The private NTV channel reported that the target of the first attack was a bus for riot police.

Investigators, including Istanbul police chief Mustafa Caliskan, were quickly on the scene. Forensic experts in white uniforms scoured the vicinity of the stadium and the park where the suspected suicide bombing took place.

The Besiktas sports club “strongly condemned” the attack and said an employee of one of its stores was among the fatalities, as well as member of its congress who was responsible for security at the stadium.

Bursaspor reported that none of the wounded were its fans and issued a statement wishing “a speedy recovery to our wounded citizens”.

Saturday night’s attacks come five months after Turkey was shaken by a failed military coup, in which more than 240 people were killed, many of them in Istanbul, as rogue soldiers commandeered tanks and fighter jets in a bid to seize power.

Istanbul has seen several other attacks this year, including in June, when around 45 people were killed and hundreds wounded as three suspected Islamic State militants carried out a gun and bomb attack on its main Ataturk airport.