Europe is at a crossroads: will we push forward a united Europe of peace and freedom?

Opinion: Twenty-five years after the fall of the Berlin Wall, Dr Helmut Kohl writes that in the crisis all the old resentments – in and against Europe – have erupted again

A lookback to November 9th, 1989 when Germany was reunited and the Berlin Wall fell after 29 years. Video: Reuters 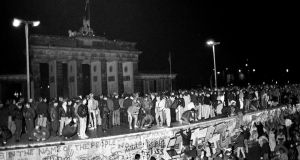 East and West German citizens celebrate as they climb the Berlin wall at the Brandenburg Gate after the opening of the East German border was announced on November 9th, 1989. Photograph: Fabrizio Bensch REUTERS 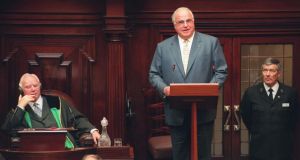 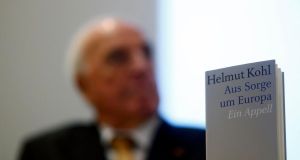 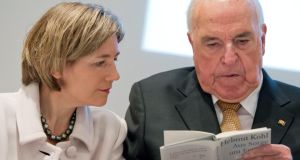 On mild evenings I sit on my terrace and, with the section of Berlin Wall that stands in my garden always in view, I think about the future of Germany and of Europe.

I look back into our history, I play out the recent decades once more and I wonder: how did we get here?

The good news: compared with what went before, our progress from 1945 until today is an unqualified success story – in spite of some wrong turns, omissions and open questions.

But the less good news is that the last years have been extremely sobering. Europe has, to put it mildly, been in a poor state since the transition to the 21st century. This is down to national issues, European missteps and an economic and financial crisis that crashed down on us with enough force to dislodge the essential European idea.

In the crisis all the old resentments – in and against Europe – erupted again. In Germany the media is full of statements such as: the euro had “fatal construction flaws”; or that “it is no longer seriously disputed that it was a mistake to establish a currency union without previously laying a foundation of common budget, tax and social policy”. A tone has crept in, too, that makes my ears prick up: “We are better than the others.”

Such historical amnesia, faint-heartedness, anxiety and complacency is, quite simply, alarming.

Against this backdrop, I ask myself: have we forgotten that peace and freedom – the decisive lessons of history – are not a given? Put simply: have we all gone mad? Have we lost our common sense and, with it, our sense of responsibility?

This makes me think of a sentence from Konrad Adenauer. The first federal chancellor said in the 1950s to a small group of friends: “We Germans were the conmen of Europe for 50 years. Now we have to be the modest men.”

This second 50 years expired at the start of this 21st century and I often ask myself whether Adenauer’s words contained not just an admonishment for the second half of the 20th century but also a prophecy for afterward?

For me it is shocking that it took the recent situation in Ukraine and Russia to make clear to us again what a stable Europe means. That, following 70 years of peace and 25 years after the end of the Cold War, peace and freedom in Europe are not a given.

Equally not a given was the unification of our country in 1990 in peace and freedom. It was only possible because, since Adenauer, we Germans stood firmly at the side of our western allies. Because people’s will for freedom asserted itself in large parts of the communist eastern bloc, including the GDR, to revolt against dictatorships. Because after the fall of the wall we kept a unified Germany in Nato. Because we bedded down German unity in the European unification process. Because our partners in the world trusted us Germans into the future.

And yet, with the fall of the Berlin Wall, old concerns resurfaced of an overpowering, large and perhaps even imperial- minded Germany in the middle of Europe – not surprising, given our history.

My clear and expedited unification path – including the 10-point plan of November 28th, 1989 – did not meet with universal goodwill from our partners. On the contrary, it encountered considerable resistance from some of our western European partners, many of whom would have preferred to push the question of German unification into the distant future.

It was far from a given that our partners and neighbours would stand by us in those difficult and uncertain times of 1990. But they understood that a historical window had opened and, ultimately, they put Germans’ unity and freedom before their own concerns. They did this in the belief that a united Germany would remain a reliable ally, with no way back to the national power politics or hegemonic claims of the 19th and early 20th century.

Two decisions have damaged the stability both of the euro, and of Europe: the premature admission of Greece to the euro area and the breach and subsequent weakening of the stability and growth pact. Both decisions took place under, and are the responsibility, of Germany’s SPD- Green government of 1998-2005. Weakening the stability and growth pact had nothing to do with German or European interests, but with party political and electoral strategy. It was not the oft-cited “construction mistakes” in the euro that caused the problem, but a lack of fidelity to the European treaties and agreements. Where there is no will, no rules or laws can help.

And so Europe stands today again at a crossroads. After years of backward-looking debate, Europe has to decide whether it wants to have another go at moving forward a united Europe of peace and freedom, or whether we let a once-in-a- century decision pass us by.

For this reason the political union has to be put back on the EU agenda. But scepticism creeps over me when I hear some struggling euro member states calling to depart from the path of consolidation, and that “flexibility” has to be utilised so as to not endanger growth.

Nor is there any alternative to the Europe of its founding fathers. We all need Europe, not just those of us in Europe. And we Germans need Europe more than the others. Germany is the country with the longest border, the most neighbours and is, by population and economic strength, the number one in Europe. What we do in Germany – and what we don’t do – has had a considerable effect on our neighbours for centuries, right up to the present day.

For my country and our continent I wish we would talk once more about real issues, about where we want to go together in Europe. I wish for greater political craftsmanship. And I wish that, for our people, Europe would once again become a matter of the heart so that we can continue to build our European house.

Dr Helmut Kohl was federal chancellor from 1982-1998. This is an edited extract from Aus Sorge Um Europa (Out of Concern for Europe), published by Droemer. Translation: Derek Scally