Euro 2016 faces up to hooliganism and terror threats 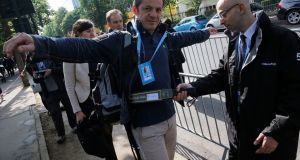 People pass a security check at the Stade Roland Garros in Paris yesterday, where the French Open is being played. Photograph: Christophe Ena/AP

When he unveiled security arrangements for the Euro 2016 games at a press conference yesterday, French interior minister Bernard Cazeneuve said he hopes the football tournament will be “une grande fête populaire” .

But he admitted that a “dual threat” of terrorism and hooliganism hangs over the competition.

Mohamed Abrini, the “man in the hat” at the Zaventem airport bombing in Brussels, has told investigators that his Islamic State cell initially planned to attack Euro 2016.

Mr Cazeneuve said France has received no specific threats against the tournament.

The group has reportedly urged its followers to stage attacks during the Muslim holy month of Ramadan, which begins around June 6th. Euro 2016 takes place from June 10th- July 10th in 10 French cities.

“No one, especially not the terrorists, will prevent us from living normally, from celebrating the values of fraternity and sharing . . . from organising great events,” Mr Cazeneuve said.

The French response to the jihadist threat has been to throw manpower and money at it.

A 90,000-strong security force, including 42,000 police and 30,000 paramilitary gendarmes, will be deployed to protect the competition.

In addition, 13,000 private security agents, considered the weakest link, will be deployed inside the stadiums.

And 10,000 French soldiers will provide security on metros and trains.

More than 75,000 Irish fans, including President Michael D Higgins and possibly Taoiseach Enda Kenny, are expected to attend some of the 51 matches.

Euro 2016 will be “entertainment with caution”, said Irish Ambassador to France Geraldine Byrne-Nason. “It will be fun, but be careful.”

Protests against a new labour law have resulted in widespread transport strikes and a run on petrol stations.

“We’re hopeful the French government will resolve the conflict before the championship starts,” said Ms Byrne-Nason.

She said it was “very important that people be able to travel around the country from match to match”.

The embassy will post updates on the transport strikes and “social climate” in France closer to the time.

Each of 24 national teams participating in Euro 2016, including Ireland, will send eight liaison officers to help identify potential trouble-makers.

Six gardaí will be stationed in stadiums for Irish matches and two will remain at the International Police Co-operation Centre, which opens on June 7th.

French sports daily L’équipe reported that the ministry of the interior has classified five matches as presenting the greatest danger of hooliganism: England-Russia, Turkey-Croatia, England-Wales, Germany-Poland and Ukraine-Poland.

The interior ministry’s “risk analysis cell” will operate 24/7 and assess threats before every match.

Right-wing politicians, including former president Nicolas Sarkozy, want the government to abandon enclosed “fan zones” where up to eight million fans expected at the tournament can eat, drink and watch matches on large screens without tickets.

The interior minister delivered a severe dressing down to officials involved in the May 21st French cup final.

Spectators searched by private security guards managed to smuggle in glass bottles, smoke and stink bombs and firecrackers. There were bottlenecks, pushing and shoving before and after the match, and security forces fired tear gas.

Jacques Lambert, president of the private company in charge of Euro 2016, said smoke bombs were hidden in sandwiches in place of sausages and pushed through openings in the chain-link fence surrounding the Stade de France.

To prevent a recurrence, the fence will be covered with tarpaulins before the Euros.