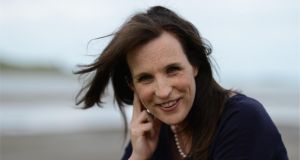 Novelist Claire Kilroy, who will be reading from her work at an event today hosted by the Irish ambassador to Belgium. Photograph: Dara Mac Dónaill 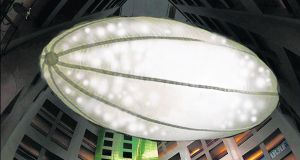 Skylum by Andrew Kearney at the Justus Lipsius, Brussels

Last Tuesday evening, the lights dimmed across the courtyards of the 17th-century Irish college in Leuven near Brussels, as attention turned to the clean white screen mounted on the wall. A small crowd had gathered for a screening of Pat Collins’s What We Leave In Our Wake, a documentary exploring themes of Irish identity.

The documentary festival at Leuven is one of hundreds of cultural events taking place across Brussels to mark Ireland’s presidency of the Council of the European Union.

The rotating presidency also affords countries a platform to showcase their cultural wares. The value of culture as a tool of “soft” political power has long been recognised by Irish diplomats and politicians.

How a nation chooses to represent itself culturally also raises interesting questions about national self-representation. As with all presidencies of the EU council, the most prominent expression of Irish identity has been the obligatory artwork that hangs in the European Council building in Brussels.

Ireland’s choice for its seventh presidency is a huge, white zeppelin-shaped inflatable structure that looms over the open space of the atrium.

Designed by Limerick-born Andrew Kearney, the installation’s pale flickering lights and faintly audible sounds respond to the movements of the people who scurry through the building beneath.

It is an eerie, abstract work that invites more questions than answers, but its real impact lies in its disavowal of clichés of Irishness.

Ireland’s cultural offerings during the presidency are notable for their modernity, defying expectations and stereotypes of Irish cultural nationalism. The cultural programme has been organised mainly by Culture Ireland and the Irish embassy in Brussels.

Ireland’s literary tradition is represented – writers Aifric Campbell and Claire Kilroy, for example, will read from their work at an event tonight hosted by the Irish ambassador to Belgium – but the presidency programme generally eschews the traditional emphasis on Irish literature, in favour of film and visual art.

The Irish Film Institute has screened Irish films from its archive throughout the presidency, including a Jim Sheridan retrospective.

Pat Collins’s film is a collage of different viewpoints on Irishness interspersed with archival and contemporary film footage. It is a curiously frag- mented work, resisting rather than resolving the question of what it means to be Irish.

Ireland’s visual artists have also been extremely well-represented. Josephine Kelliher of the Rubicon Gallery chose Brussels for an exhibition of contemporary Irish art, tapping into the vibrant – and moneyed – visual arts scene in Belgium.

One of the cornerstones of the presidency’s cultural programme has been a joint exhibition by the Irish Museum of Modern Art (Imma) and the Hugh Lane Gallery, in the Centre for Fine Arts in Brussels. The exhibition presented works by 20 Irish contemporary artists from both galleries, alongside materials and unfinished paintings from Francis Bacon’s studio.

The decision to include Bacon was made no doubt with an eye on the box office, but the juxtaposition of his work with a range of contemporary artists served to showcase the huge scope and vibrancy of Ireland’s contemporary art scene.

Despite the diversity of work on display, the pieces are connec- ted by a refreshing modernity and internationalism.

From Richard Mosse’s images of soldiers in the Democratic Republic of Congo to Niamh McCann’s Tree, a work devised in Finland and reassembled in Ireland, the assortment speaks of a wide span of geographic and artistic influences.

The interplay between Irish and European cultural identity is also evidence in Shaping Identities Together, an exhibition that runs at Leuven until the end of the month.

Five artists, including painter Hughie O’Donoghue, were asked to reflect on Leuven, the college founded more than 400 years ago by Irish Franciscan scholars.

Where better to explore Ireland’s cultural identity in the context of its presidency of the EU Council than at the Irish college at Leuven, where the famous chronicle of Irish history known as the Annals of the Four Masters was written in the 1630s.

That one of the earliest written works of Irish history was produced in the heart of continental Europe suggests that Irish cultural identity is not something that was formed in isolation, but has always evolved in dialogue with Europe.