Fundraiser is shipping home subset of Greece’s diaspora to vote 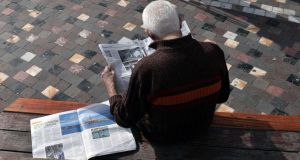 A man reads a newspaper in Athens as the election looms on Sunday. Many are looking to leftist party Syriza to reverse anti-austerity policies. Photograph: Louisa Gouliamaki/AFP/Getty Images

Ahead of Sunday’s crucial general election in Greece, flights into the country’s airports will not only contain teams from the world’s media arriving to cover yet another key event in the country’s troubled five-year crisis, but also returning Greek emigrants keen to have their say in determining which path their native country will take.

Some 200,000 Greeks, among them highly educated graduates, are estimated to have left the country of 11 million people since 2009, mainly for the UK but also Germany, the Netherlands, Belgium, Switzerland and the US.

Surveys have cited the lack of career prospects, meritocracy and trust, corruption and clientelism as the main push factors in this new wave of Greek emigration. For that reason, some members of this new generation of emigrants are keen to vote for change.

“A flight for democracy”, the online fundraiser they launched on Indiegogo, has since raised almost €12,500 with donations ranging up to €400 in value.

It’s enough to get 65 Greeks home to vote, Vougiouklaki says. “We’re from 15 different countries, mainly the US, Australia and the EU. There’s no age limit for participation, but the priority is to help students, those on low incomes and the unemployed. In most cases, participants get 80 per cent of the cost of their flight, with more given to people who cannot afford to pay the full fare.”

In her case, the return flight from New York costs €690, €550 of which she received back from the campaign, which makes no secret of its strong endorsement of one particular party.

“We started the campaign so we could go back and vote for Syriza, so that we can change the government,” Vougiouklaki explains, referring to the leftist party almost certain to win the election.

The campaign sees the elections as an important opportunity not just for Greece but also for the rest of Europe. “A government of the left will shake things up in Greece and Europe as a whole, and it will act as an instigator for more anti-austerity voices to rise,” it believes.

When asked if the campaign can be sure that all those travelling thanks to the campaign will vote for Syriza, Vougiouklaki laughs. “When people contact us through the fundraising page or Facebook, we try to understand where they stand. But we don’t have a strict filter that says they have to prove they are Syriza or else. But these things show, more or less,” she says.

Unlike in some countries, there is no postal vote for Greeks abroad, nor can they cast a ballot in consulates or embassies, despite years of intensive lobbying from expatriate groups and vague commitments from successive governments in Athens.

But, closer to home, another large cohort of Greeks will look on enviously on Sunday as they watch their compatriots vote. As a result of the snap elections being called so early in the year, the government announced it had no time to register the 100,000 Greeks who turn 18 this year.

“I was disappointed. While I believe that there wasn’t enough time to register 18 year olds, many suspect that the government parties didn’t try because people my age don’t vote for them,” says Fani Kalogirou, a secondary school student in Thessaloniki.

“Most young people vote for parties they see as being close to the youth,” Dimitris, Fani’s twin brother, explains. “I was very excited about voting for the first time and had started to look around for information to see what party to vote for.”