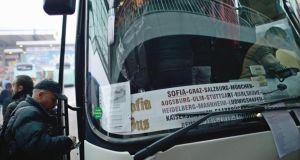 A passenger boarding a bus departing for western Europe at the central bus station in Sofia, Bulgaria, on Thursday. A survey in the Netherlands has found that six out of ten Dutch voters believe there are already “too many” immigrants from eastern Europe in the country. Photograph: Vassil Donev/ EPA

A new survey shows the traditionally liberal Dutch becoming increasingly right-wing on immigration, with almost two-thirds of the population of the view that new arrivals from Bulgaria and Romania are likely to abuse the social welfare system and get involved in crime.

The survey by the Netherlands Institute for Social Research (SCP) will add to the New Year woes of prime minister Mark Rutte and his Liberal- Labour coalition government, who are trailing in the polls behind Geert Wilders and his anti-immigrant Freedom Party in the run-up to the European elections.

Mr Rutte’s government has set up a research project in a last-minute bid to undermine populist claims that Dutch workers are being squeezed out of jobs by cheaper labour from eastern Europe – but the SCP survey makes it clear that those views are firmly entrenched.

The findings show that six out of 10 Dutch voters believe there were already “too many” immigrants from eastern Europe in the country – even before the lifting of restrictions on Bulgarian and Romanian arrivals on January 1st.

They also show that – whatever the outcome of the research by social affairs minister Lodewijk Asscher – 47 per cent of the population believes that because eastern Europeans are typically willing to work for less, they are in effect “taking Dutch jobs”.

At the same time, just shy of 50 per cent say they are also worried about rising crime and social unrest in areas with a high immigrant population, and that pressure on public resources such as housing if there is a large new influx from Bulgaria and Romania will make that situation worse.

The survey shows the government is clearly failing to hammer home its point that of some 600,000 nationals from various EU states currently living in the Netherlands, only about 20,000 are claiming any form of unemployment benefit or social welfare.

That theme has been championed by the Romania’s ambassador to the Netherlands, Ireny Comaroschi, who says she does not believe large additional numbers of Romanians will arrive, and that those who do will be beneficial – highly qualified, hard-working and willing to integrate.