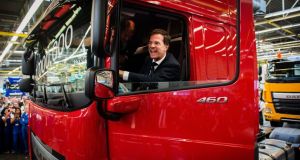 The Dutch government suffered its second embarrassment in a week when two ministers resigned over misleading parliament about a payment to a convicted drug dealer – just days after prime minister Mark Rutte said jihadists would be “better dead” than returning to the Netherlands.

The twin gaffes come just a week before provincial elections next Wednesday in which both Mr Rutte’s Liberal Party and his junior coalition partners, Labour, are expected to lose heavily to Geert Wilders’ right-wing Freedom Party, campaigning on a populist anti-Islam and anti-EU ticket.

The payment to convicted drug dealer Cees Helman (63) dates back to 2001, when the authorities seized the gangster’s assets but were subsequently unable to prove that they had been amassed by criminal activity.

At the time, Fred Teeven – who resigned yesterday as junior justice minister – was chief public prosecutor and signed off on the tax-free deal with Helman, without, it has since transpired, giving the full details to his superiors or to the tax office.

Although Helman’s lawyers insisted on “complete confidentiality”, the belief was that Helman had been paid about two million guilders (roughly €1 million) – and this was the figure confirmed by Mr Teeven’s boss, justice minister Ivo Opstelten, when questions were raised in parliament last year.

In fact, Mr Opstelten went even further – maintaining all the paperwork associated with the payment had since disappeared. He could not have been more wrong. Not only did it emerge that the Helman compensation was in fact 4.7 million guilders or about €2.1 million, twice what was originally thought by MPs, but on Monday “digital confirmation” of the original deal was found by justice officials.

“There has been a lack of certainty about the facts surrounding the settlement, and I have concluded that I must now resign,” said Mr Opstelten, as his career followed that of his junior minister into oblivion.

Accepting the resignations, Mr Rutte said “the cabinet is losing two driven professionals”. However, others observed that, by resigning on Monday night, the two men had avoided having to answer embarrassing questions as ministers yesterday.

Mr Rutte himself has been in the firing line since the end of last week when he told a TV debate Dutch jihadists who travelled to fight in Syria or Iraq would be “better dead” than returning to the Netherlands and posing a threat.

Labour has distanced itself from the comments, with deputy prime minister Lodewijk Asscher observing it was not appropriate for a prime minister to hope any of his fellow countrymen or women should die – instead they should be prosecuted on returning.

Mr Rutte replied: “Jihadists know what they are getting into. They aim to kill as many people as possible. They will soon be back, perhaps to carry out attacks here as well. As prime minister, my job is to stop that happening.”