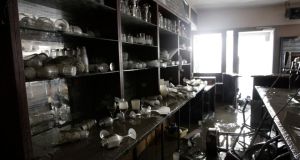 The ‘Theatercafe - Aquarium’, damaged by the floods, is pictured in the centre of the Bavarian city of Passau about 200km (124 miles) northeast of Munich yesterday. Photograph: Michaela Rehle/Reuters


The Danube river is threatening to inundate more towns and cities in several countries as deadly floods that have wreaked havoc in Germany, Austria and the Czech Republic roll east.

Hungary has declared a state of emergency and expects the Danube to rise to levels not seen for 50 years, while neighbouring Slovakia fears the river will reach at least the same height as in 2002, when huge floods devastated swathes of central and eastern Europe.

Countries farther downstream on the Danube, including Serbia, Bulgaria and Romania, are watching warily as the floodwaters push southeast towards the Black Sea, having caused major problems upstream in Germany and Austria.


German troops
In Passau, where the Danube, the Inn and the Ilz rivers converge, the water reached its highest level since 1501, prompting a visit from German chancellor Angela Merkel and a pledge to commit €100 millions to affected areas. About 4,000 German defence troops were deployed to help disaster relief efforts in four states, reinforcing dykes with sandbags, distributing food, clothes and other essentials.

“This is not just a once-in-a-hundred years event, it’s one you have to call exorbitant,” Merkel said in Passau. “We want to help. Even as the watermarks slowly recede, the damage will continue to have an effect for a long time.”

Other German cities including Dresden and Regensburg are on alert for dangerously high water, while in Austria some 20,000 soldiers, police, firefighters and other rescue workers were reinforcing flood defences and helping evacuate thousands of people from their homes.

At least 11 people have died and several others are missing as a result of the floods, which have affected almost all the major waterways of central Europe, including the Rhine, Elbe and Vltava as well as the Danube. Many roads and stretches of railway are closed in the affected countries, and shipping along the rivers has been halted.

Thousands of homes are without power and schools, hospitals and major factories have been forced to close. Prague has been one of the worst affected cities, with large areas of the Czech capital inundated by the Vltava river for the second time in less than 11 years. The historic Charles Bridge and streets around the river were closed, and a large section of the metro system was shut down.

Major power stations and the Staropramen brewery beside the river were also shuttered as the Vltava rose, but officials said yesterday they hoped the situation would now gradually improve.

“The situation in Prague is stabilised and the worst is behind us,” said the city’s acting mayor Tomas Hudecek.

“Right now, we are dealing with the complicated transport situation and putting together clean-up plans as the subway will have to remain closed for at least a day.”


More rain
With more rain forecast and the Vltava’s dams at capacity, however, the Czech authorities say it will be some time before life gets back to normal along the river. At least 10,000 people have been evacuated in recent days.

“This is the result of a really quite extraordinary rainfall situation,” said Igor Liska, technical expert at the International Commission for Protection of the Danube River. He said authorities had coped reasonably well with the emergency, but more needed to be done to prepare for future inundations by slowing the surge of rainwater into rivers.

Better management of forest and farmland, the creation of larger flood plains and less use of concrete in infrastructure were all ways to retain rainfall on the land and avert sudden spikes in river levels, Mr Liska said.