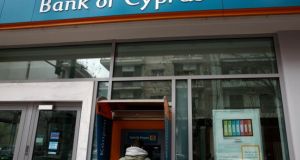 A man withdraws money from an automatic teller machine at a branch of Bank of Cyprus. A euro zone proposal would see Cyprus receive a bailout worth ¤10 billion but it has demanded depositors in its banks forfeit some money to stave off bankruptcy. Photograph: Reuters

Cyprus has postponed its parliamentary vote on a bank deposits levy until tomorrow.

Yiannakis Omirou, the speaker of parliament, said the delay was needed to give the government time to amend an international bailout deal agreed on last week.

Cyprus's parliament votes today on a plan to seize money from bank deposits as part of an EU bailout, a move that has sent a shiver across the bloc, caused the euro to tumble and stock markets to dive.

The Cypriot government is now trying to modify the deal to lower the burden on small savers with less than €100,000 in the bank. The modification must be approved by the other eurozone finance ministers before the Cypriot parliament can vote on it. The vote is now expected tomorrow afternoon.

“Assessing the possible decision of imposing additional tax by Cyprus on deposits Mr Putin said that this decision, if taken, would be unfair, unprofessional and dangerous,” Mr Peskov said.

Russian banks had about €9.2 billion ($12 billion) placed with Cypriot banks and corporate deposits amounted to €14.6 billion ($19 billion) at the end of 2012, according to Moody's's rating agency.

The announcement at the weekend that tiny Cyprus would impose a tax on bank accounts as part of a €10 billion ($13 billion) bailout broke with previous Eu ropean practice that depositors' savings were sacrosanct.

Ahead of the vote in parliament, the government was working on a plan to soften the blow to smaller savers, by tilting more of the tax towards those with deposits greater than €100,000.

which knocked confidence in European banks, though some investors saw the dips as a buying opportunity.

The Cyprus government says it has no choice but to accept the bailout with the levy on deposits, or go bankrupt.

Residents on the island emptied its cash machines to get their funds over the weekend. The move not only infuriated Cypriots, it unnerved depositors in the euro zone's weaker economies and investors fearing a precedent that could reignite market turmoil.

The euro fell in early trade, as did the rouble and currencies in central and eastern Europe.

Moscow's MICEX was down 2.4 per cent. Brussels has emphasised that the measure is a one-off for a country that accounts for just 0.2 per cent of European output.

The worst fear is that savers in other, larger European countries could become nervous and start withdrawing funds, although there was no immediate sign of that early today.

US economist Paul Krugman wrote in The New York Times: “It's as if the Europeans are holding up a neon sign, written in Greek and Italian, saying 'Time to stage a run on your banks!'”

Today is a bank holiday in Cyprus, giving the government until tomorrow to approve the measures before banks open.

The bailout is needed mainly to recapitalise banks. Approval in the fractious 56-member parliament is far from a given: no party has an absolute majority and three parties say outright they will not back the tax.

A vote initially planned for last night was rescheduled to give more time to build a consensus.

A source close to the consultations said authorities were hoping to cut the tax to 3 per cent from 6.7 per cent for deposits under €100,000.

Finance ministers, including Minister for Finance Michael Noonan, reached an agreement on Saturday morning on a long-delayed bailout for Cyprus which includes an unprecedented measureto levy depositors.

The Irish Government welcomed the agreement, describing it as a "positive development for Cyprus, the euro zone as a whole, and Ireland ".

“The Cypriot case is a complex and difficult case and it was a significant achievement to reach an agreement between all parties,” a Department of Finance spokesman said yesterday. “This agreement provides a sustainable solution, which deals with Cyprus's financial system and its funding requirements.”

Cyprus followed Greece, Ireland and Portugal in seeking a bailout last June after its banking sector was heavily exposed to Greek debt. Spain has also requested a €40 billion bailout for its banks.

Cypriot economist Sophocles Markides told The Irish Times the EU's handling of this crisis could “finish off Cyprus as a financial centre”.

He warned the proposals could have negative dynamic repercussions across the euro zone as deposits under €100,000 are, by law, supposed to be guaranteed.

1 Coronavirus: Government to extend restrictions for at least two weeks
2 Growing hope in Government of partial easing of restrictions after May bank holiday
3 Coronavirus: More ‘striking’ evidence BCG vaccine might protect against Covid-19
4 Coronavirus: Ireland will have to ‘live alongside the virus’
5 Chief medical officer urges people not to visit hardware stores
Real news has value SUBSCRIBE