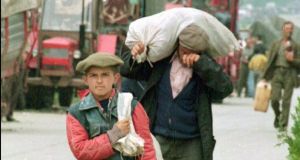 A father and son, Serb refugees from Krajina in the aftermath of Croatia’s ‘Operation Storm’, walk alongside refugee vehicles near the Bosnian Serb city Banja Luka on August 10th, 1995. Photoraph: Ranko Cukovic/Reuters 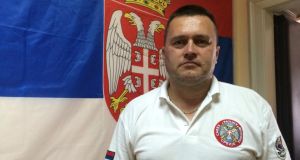 Zeljko Vukelic, who fought with Serb separatists in Croatia in the country’s 1990-95 war. He now lives in Novi Sad, Serbia. Photograph: Daniel McLaughlin 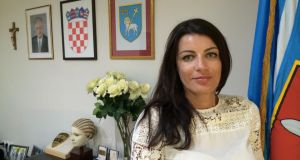 Josipa Rimac, the mayor of Knin, which was retaken by Croatian forces from Serb separatists on August 5th, 1995, during Operation Storm. Photograph: Daniel McLaughlin 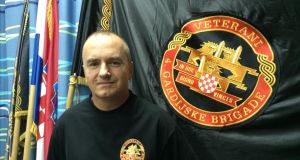 Marko Vukasovic, one of the first Croatian troops to enter the town of Knin when they re-took it from Serb separatist rebels on August 5th, 1995. Photograph: Daniel McLaughlin

When the Croatian military’s Operation Storm rumbled towards the Serb-separatist-held town of Knin 20 years ago, eight-year-old Anja Raskovic stuffed some things into a rucksack and set off with her parents into the unknown.

“On August 4th we heard bombs and shells exploding, and went out to a nearby village where my grandmother lived,” she recalled.

“When we got there it was clear that something big was happening and that lots of Serbs were already on the move.

“We didn’t have much time to prepare, and didn’t know where we were going, but we joined the huge lines of cars and trucks and tractors. We wanted to stay, but we had no choice but to leave.”

Raskovic’s family was among some 200,000 ethnic Serbs who fled Knin and the surrounding Krajina area as Croatian troops launched a blitzkrieg against separatists who had seized the region in summer 1990 and driven out its Croat population.

With the biggest military operation in Europe since the second World War, Croatia would reclaim a vast swathe of land from Serb separatists and help force belligerent Serbian president Slobodan Milosevic to the negotiating table that autumn, when he agreed to end five years of conflict that had destroyed Yugoslavia.

This week, Croatia will mark 20 years since its troops surged back into Knin, putting Serb rebels to flight and securing the country’s territory and independence from a Belgrade poisoned by Milosevic’s bloody dream of a “Greater Serbia”.

A military parade is scheduled for Zagreb, while in Knin the country’s biggest Catholic church will be consecrated, a new monument to wartime president Franjo Tudjman will be helicoptered into the hilltop fortress, and 150,000 people are expected to attend a concert by nationalist singer Marko Perkovic Thompson.

For Serbs, however, the anniversary will bring only bitterness.

Fewer than a quarter of the Serbs who fled Croatia have returned to their homes, and Serbia regards Operation Storm as an act of ethnic cleansing, supported by the West and led by political and military chiefs who have never been punished.

“Most Croat soldiers didn’t commit crimes, but some did and Croatia knows it,” said Zeljko Vukelic, a Croatian Serb who fought with separatist forces, referring to several hundred Serb civilians allegedly killed by Croats during and after Operation Storm, when thousands of Serb homes were looted and burned.

“Their leaders might not have ordered it, but they were aware of it and did not stop it – and Serb commanders have been found guilty in such cases,” said Vukelic (46), who fled Croatia with his family just before the operation and now lives in Serbia.

While Milosevic and many former senior Serb officers have been convicted for crimes committed during the Yugoslav wars, the Croatian generals who led Operation Storm were cleared of war crimes on appeal in 2012, and Tudjman and other wartime Croatian political leaders died soon after the conflict.

“Some Serb civilians were killed in the chaos after Storm. Croats came home to find their houses occupied or destroyed, and some people on both sides were drunk and crazy. But I never saw a Croatian soldier kill a civilian,” said Marko Vukasovic, whose unit was one of the first to enter Knin on the morning of August 5th, 1995.

“It was a great feeling to go into Knin, which was Croatia’s medieval capital but had become a symbol of Serb separatism,” said Vukasovic (52), who fought in many of the key battles of a 1990-1995 war that claimed some 20,000 lives.

Before the conflict, ethnic Serbs formed a majority in Knin and much of the Krajina region along Croatia’s border with Bosnia.

As Yugoslavia collapsed, the area became a flashpoint in rapidly worsening relations between Serbia and Croatia, where Milosevic and Tudjman whipped up fear and nationalist feeling with the help of often hysterical propaganda.

As Croatia sought to follow Slovenia in leaving a dysfunctional and increasingly Serb-dominated Yugoslavia, Krajina Serb politicians – with backing from Belgrade – rejected the authority of Tudjman and his government, blocked roads into their region and announced the creation of a Republic of Serb Krajina; about 80,000 Croats were driven from the region and local Serb rebels, backed by Yugoslav army troops, committed arbitrary killings of Croat civilians.

As Vukasovic and his comrades rode back into Knin in 1995, it was Serb civilians like Anja Raskovic and her family who were on the move, loading what they could into cars, tractors and trucks and fleeing for Bosnia and Serbia.

“Serb forces had already left, and offered no resistance. Knin was almost deserted,” Vukasovic said of the culmination of Operation Storm, which pitted about 130,000 Croatian troops against 30,000 Serb fighters.

“I felt sorry for those columns of people leaving the land where they had lived for centuries. But I had seen how Serbs brutally expelled our people from that land in 1991. To be honest, I had mixed feelings, of sympathy and revenge.”

Josipa Rimac’s family returned to Knin two days after the Croatian flag was raised again over the town’s fortress; she had fled the region with relatives in 1990, when she was 10.

“My father was jailed here, just because he was Croatian, and he was forced to sign over the papers to our house. We couldn’t stay here,” recalled Rimac, who is now mayor of Knin and a rising star in the Croatian Democratic Union (HDZ), the party founded by Tudjman.

“We never doubted that we would come back, because this is our land. It’s a wonderful feeling that Knin is free, and that we can go to pray in the Catholic church without fear. Knin is ours and we won’t let it go.”

Serbia’s leaders – ex-allies of Milosevic – will attend commemorations this week of what they call the “ethnic cleansing” of Krajina, and urge western officials not to join Croatia’s celebrations of a victory that owed much to weapons sourced in Europe and training given to Croatian officers by retired US military men.

‘I worked for the Red Cross for seven years and saw how Serbia treats its refugees from the war,” said Rimac.

“Serbian politicians don’t feel sorry for those people. They are sorry that Operation Storm was a success, and they blame Serbs from Knin for the failure of their plans [for ‘Greater Serbia’].”

Anja Raskovic, who returned from Serbia to Knin in 1999 and is now a deputy on the town council, said she and fellow Serbs know what to expect this week. “We are used to this celebration every August. Serbs will stay at home or leave for a few days,” she said.

“It’s not a simple or easy time for Serbs. But we will survive and, God willing, things won’t get out of hand.”