Crisis in French farming as country fails to modernise industry 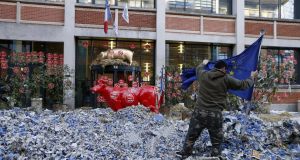 A protester farmer holds an EU flag among flakes of eggs boxes sprayed by farmers using a chipper in front of the Ile de France headquarters of the ASP, in Montreuil, outside Paris, to protest against the falling prices of their products. Photograph: Thomas Samson/AFP/Getty Images

Farmers ought to know better than to bite the hand that feeds them.  But a demonstration in the Paris suburb of Montreuil on Tuesday night stood out among almost daily protests over the crisis in French agriculture, prompted by the collapse of milk and pork prices.

Hundreds of farmers gathered in front of the Agence de Service des Paiements, the agency that disburses some €10 billion in annual EU agricultural payments to French farmers. They sprayed the office building with mulched paper, to protest against red tape and delayed payments, burned tyres and replaced the French and EU flags with those of the FNSEA and Jeunes Agriculteurs farmers’ unions.

Phil Hogan, the European Commissioner for Agriculture, never ceases reminding the French how much they benefit from the Common Agricultural Policy.  The CAP still comprises 38 per cent of the EU budget. France and Ireland are allies in defending that spending.

But there are profound differences in attitude towards farming. France retains a romantic vision of the profession. The French word for farmer is paysan or peasant. “They never think of themselves as businessmen trying to make a profit,” says an Irish source. In a policy paper drawn up for last Monday’s council of agriculture ministers in Brussels, Paris suggested that farmers should be paid to decrease output. To France’s European partners, it looked suspiciously like a throwback to the old CAP, prior to the 2013 reform that ended quotas.

By proposing to control supplies to drive prices up, the French government is addressing the anguish of farmers like Arnaud, a 38-year-old father of two and owner of 140 sows and 40 dairy cows. Before he took his own life in Brittany on February 16th, he wrote a letter in which he said he had no money to comply with French and EU regulations. Nor could he find a buyer for his farm.

“All the young farmers who’ve set up in the last decade are in the abyss,” Arnaud’s friend, Emmanuel, told Europe 1 radio station. “[Prime minister Manuel] Valls . . . come to Brittany to see what is happening . . . It’s high time you came to see the despair of the farmers who feed you.”

Farmers have the highest suicide rate of any group in France.  Suicide is the third cause of death among farmers, after cancer and cardiovascular disease.

Thierry Merret, the president of a farmers’ syndicate in the Finistère, claims 2,000 farmers in the Breton department earn less than €300 per month.

French farmers dislike the socialist government, and feel disenfranchised from Europe, despite receiving an average of €30,000 each from the EU annually (compared to less than €15,000 for an Irish farmer).

Yet this week, the government gave them everything they wanted.

Mr Valls announced that social charges, which pay farmers’ healthcare and retirement benefits, would be reduced immediately from 45 to 35 per cent of income.

By government decree, meat products processed in France will be required to list the country of origin of ingredients. Agriculture minister Stéphane Le Foll estimated the government is spending €1.9 billion to help farmers.

Supermarket chains, including the giants Carrefour and Leclerc, this week established a €100 million “solidarity fund” for farmers, which will in essence pay them to stop demonstrating in front of stores, blocking deliveries and taking foreign products off supermarket shelves.

Farmers are hurting throughout the EU, but the crisis is particularly acute in France, where it symbolises much of the country’s inability to adapt to free markets and globalisation, to innovate and modernise .

Instead of working together, farmers, processors, retailers and the ministry often fight each other. They are but one example of the alarming lack of cohesion in French society.