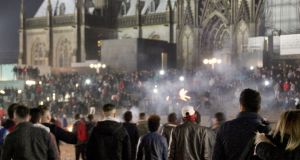 On January 6th Cologne usually celebrates its most famous, deceased residents: the three wise men from the Bible whose remains are said to rest in the hulking, Gothic cathedral.

This year the city on the Rhine went through the motions but there was an edge in the air, as Cologne struggles with another kind of epiphany: a gang of Arabic-speaking young men who rushed and robbed scores of New Year’s Eve revellers on this spot.

Without warning, and reportedly heavily drunk, they launched fireworks into the crowd and sexually assaulted scores of women.

Just as remarkable was the official reaction of city police: a January 1st report noting a “calm atmosphere” overnight.

Only after social media outrage reached fever pitch, and women came forward to tell their horrific stories, did police break their silence.

At about midnight on New Year’s Eve Katia (28) had to push through a group of men gathered near the station with her friends.

“A passage opened up through which we walked, suddenly I felt a hand on my bum, on my breasts, I was grabbed everywhere, it was horrific,” she told Express newspaper.

“I was desperate, it was like running the gauntlet. Over the space 200 metres, I think I must have been touched 100 times.”

Evelin (24) was with her friends before Cologne Cathedral at the same time. “I had a knee-length skirt on, suddenly I felt a hand on my bottom and under my skirt,” she said.

“I turned around and stared into a sea of grinning faces.”

Police officers filled Cologne station on Wednesday, many still shocked by what they had seen: weeping, panicked women they had to pull from the crowd telling horrific tales of their breasts and hair being grabbed.

One unnamed police officer on duty at the train station told Express that he “dragged a crying girl from the crowd whose slip had been ripped off”.

Eye-witnesses say the tension began to build from 9pm when a crowd of young, drinking men assembled on the square, swelling to about 1,000 people by 11pm.

Police on duty report that the crowd appeared to be composed largely of Arabic-speaking young men of north African appearance.

Scuffles began on the plaza between the square and the cathedral and, at about 11.30, eye-witnesses say the men began launching fireworks into the crowd.

“I saw the fireworks being shot at people but had no idea of what was really going on, it’s outrageous,” said Kevin Mehdorn (26), who works nearby.

Police moved to clear the square after the firework attacks, a difficult task as many of the men appeared to speak no German.

It was between midnight and 12.45, when the plaza between the station and the cathedral was finally cleared, that most attacks appear to have taken place both in that area and on the nearby Rhine river promenade.

At about 1am the first reports of thefts and sexual assaults were registered with the police, but they do not appear to have been pieced together as indicators of a wider problem.

Only slowly did a full picture emerge of the co-ordinated attacks in Cologne, as similar reports emerged from Stuttgart and Hamburg.

More than 150 criminal complaints have been filed so far by women in the three cities and police in Cologne have struggled to explain the delay admitting the scale of the attacks.

German federal police, who have responsibilty for the train station and adjoining plaza, say they have struggled for months with groups of migrant men, a struggle that peaked on New Year’s Eve.

“We have too few people on duty here, half of our number have been withdrawn to work with asylum seekers on the border,” said one officer, who asked not to be named.

The seriousness of the attacks became clear when chancellor Angela Merkel intervened to express her “outrage” at the attacks and demand a “tough response” by authorities.

In nearby Düsseldorf alone the gang has more than 2,000 members, according to a government report, half of whom are from Morocco and are long-time German residents, though authorities fear new members are being recruited from asylum homes.

“We will not accept that north African men organise themselves to humiliate defenceless women with awful sexual attacks,” said Ralf Jäger, interior minister in the western state of North Rhine-Westphalia.

The priority now, he said, was to show a quick and tough response to reassure people, particular women in Cologne, that they were safe on the streets, especially with the city’s popular pre-Lenten carnival parade taking place next month.

“We owe this to the women, and also to the north African refugees who want to live with us peacefully,” said Mr Jäger.

In Cologne’s historic town hall on Wednesday, mayor Henriette Reker struggled to maintain a facade of normality during the traditional reception for the “Sternsinger” – children from the nearby cathedral choir dressed as wise men who collect for charity.

“Tell everyone you meet why it is important to help those less well off than yourselves,” Ms Reker told the children.

Looking on, Bernd Rolf, father of one of the singers, said he had told his son about the fireworks attacks – but not the rest.

“We won’t be intimidated by this and will go to the carnival parade as usual,” he said.

Outside the cathedral, three members of the extreme right Pro-NRW party seized the moment to hold a mini-demonstration.

They demanded “cleaner cities, like in the old West Germany, where women and older people felt safe at night”, but they were drowned out by almost 100 members of a local anti-Nazi group shouting “Nazis out!”.

“These attacks are a gift to extremist groups like Pro-NRW,” said anti-fascist campaigner Lisa Schneider, who organised the counter-demonstration.

“But Pro-NRW have no real roots in the city and I’m confident people will see through attempts to use the attacks to manipulate opinion agaist vulnerable asylum seekers.”

As emotional debate continued online, criticism has turned from the police to Germany’s media outlets.

For days they faced a dilemma of how to report on the attacks and the perpetrators responsibly without confirming the “criminal foreigner” cliches pushed by far-right groups anxious to turn public opinion against asylum-seekers.

Now xenophobic groups, from Dresden’s Pegida to Pro-NRW, have pounced on the cautious reaction as proof of mainstream media bias against reporting crimes carried out by non-German nationals.